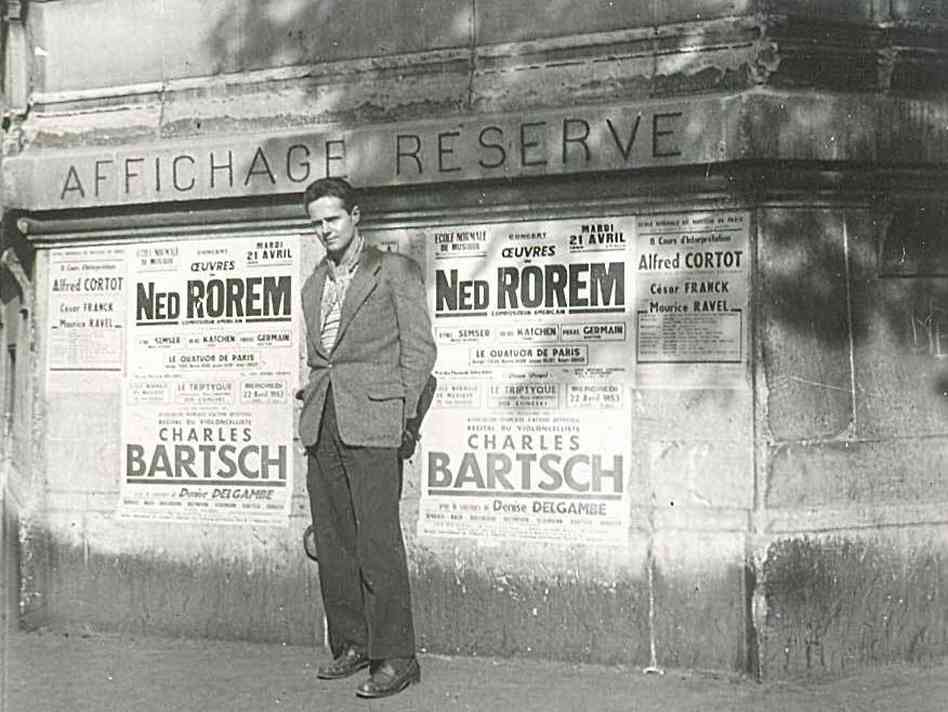 The American composer and author Ned Rorem has always been a pacifist. His uncle (his mother’s younger brother) was killed in the First World War and the rest of the family became Quakers soon after. That meant that Rorem himself was exempt from military service on religious grounds; now 90, he remembers that “no, it wasn’t especially easy” to be a prominent conscientious objector in the United States during the 1960s.

END_OF_DOCUMENT_TOKEN_TO_BE_REPLACED

First published in the Guardian on 28 January, 2014

Anyone with the misconception that Gaelic song is all twee and interminably mournful should spend a minute or several listening to Kathleen MacInnes. The South-Uist singer has a voice like peat smoke and good whisky, as robust, sassy and soulful as it is supple and expressive. She strode on stage in skinny jeans and a slick white blazer and chatted warmly with the Celtic Connections audience in her native tongue. Whether or not you understood the language, it would have been hard to miss the earthy charm that makes MacInnes such a stage natural.

END_OF_DOCUMENT_TOKEN_TO_BE_REPLACED 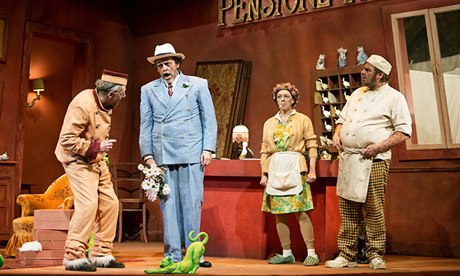 First published in the Guardian on 27 January, 2014

Scottish Opera sorely needed a triumph after an autumn dominated by management crisis and artistic drift. As one of only three full-scale operas they stage this season, the pressure was on for their new production of Don Pasquale to compensate in fizz and vibrancy for what the ’13-14 programme lacks in substance.

It’s by no means a flop, but it’s not a triumph either. French-Canadian director/designer team Renaud Doucet and Andre Barbe update Donizetti’s 1843 comedy to 1960s Rome, where Don Pasquale owns a shabby pensione and his nephew Ernesto manages the reception. The period suits the opera’s inherent generation clash: it’s entirely plausible that the ageing Pasquale feels out of touch, that the youth flagrantly disrespect him and that Norina’s spending spree escalates into La Dolce Vita decadence.

END_OF_DOCUMENT_TOKEN_TO_BE_REPLACED

It wasn’t surprising that the Conservatoire’s concert hall was packed with students for this lunchtime recital. Who better a role model than pianist Steven Osborne? Here is a musician at the very top of his game, a musician with enough authority that he doesn’t have to shout loud to make us listen in close. His technique is ferociously powerful, sure, and he really let it fly in a barnstorming performance of Rachmaninov’s Second Sonata. But it was the gradations of colour, the way he breathed space into phrases, the inquisitive touch and magical sense of flux that made this recital so captivating. His playing is exciting for its latent possibility: the knowledge that it could erupt at any moment, but usually doesn’t.

END_OF_DOCUMENT_TOKEN_TO_BE_REPLACED

When drummer/composer Iain Copeland spent a year-long residency in the north-west of Sutherland, his interest was piqued by the residential boarding hostels that host remote students through the school week. â€œSome kids loved it, some hated it,â€ he says, and launches into an accordingly misty, ambivalent opener called Halcyon Daze. Later in the set he returns to the hostel theme. â€œI imagine most of the kids shared a certain jubilation on the bus going home for the weekendâ€ â€“ cue a thumpingly bright-spirited tune, Homeward Bound, bolstered by cheerful guitar licks and big-band brass.

END_OF_DOCUMENT_TOKEN_TO_BE_REPLACED 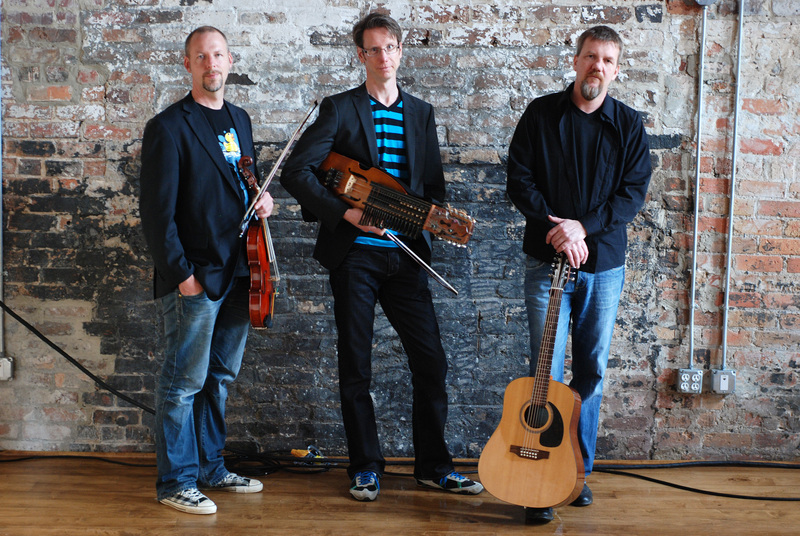 After 25 years in the business the Swedish string trio VÃ¤sen are sounding better than ever. They write gorgeous tunes and deliver them with a spry step, airtight ensemble and bittersweet lyricism that gets deep under your skin. They’ve lost none of their daft banter, none of their warm and raucous rapport. A hearty cheer went up when they ambled on stage at the Mitchell: they’re Celtic Connections favourites and for obvious reason.

END_OF_DOCUMENT_TOKEN_TO_BE_REPLACED

AndrÃ© Barbe is chuckling about the fact that art, for all its universality, can still be downright culturally relative. â€œIn the UK our work is considered quirky,â€ he says. â€œIn North America we’re considered very avant garde, in France we’re considered North American with culture. In Germany they see our stuff and say ‘finally! Not Regietheater!’. He gives a very Gallic shrug, as if to imply that culture critics are all daft anyway. â€œWe don’t really care what they call us. It’s the audience that matters.â€

Barbe is a Quebecois opera designer and one half of Montreal’s Barbe & Doucet production duo; the other half is his husband, the French director Renaud Doucet. Since the pair met at L’OpÃ©ra de MontrÃ©al in 2000 they haven’t accepted any work apart. They come as a double-act or nothing, a joint brand in which design and dramaturgy are inextricable. It’s both an artistic vision and a life decision: if they were going to make their relationship last in an industry that involves long periods away from home, they decided that they would simply have to work together or not at all.

â€œAny couple needs a project, whether it’s a kid or an industry,â€ says Barbe. â€œWe don’t have kids. This is our project.â€

END_OF_DOCUMENT_TOKEN_TO_BE_REPLACED

Academy of St Martin in the Fields/Bell
Usher Hall, Edinburgh

It was as soloist that Joshua Bell opened this concert and as soloist that he closed it. The American violinist is music director of the Academy of St Martin in the Fields â€“ a position that rolls conducting, leading and concerto-playing into one â€“ and despite the orchestra’s virtuosic flair there was never any question of who was centre stage. Whether that’s a negative depends on the extent of your appetite for Bell’s sound, style and musical ideas.

END_OF_DOCUMENT_TOKEN_TO_BE_REPLACED

Reviews of the National Jazz Trio of Scotland tend to open with a pile of contradictions: this isn’t a trio, they don’t play jazz, they’re not an official ‘national’ ensemble. But don’t be fooled by the cheeky misnomers. The music of Bill Wells â€“ the band’s pianist/composer backbone â€“ might be deceptively simple, but his songs are never less than disarmingly sincere in their sweet wistfulness, their dreamlike nostalgia, their shy, poignant confessionals. Wells’s mastery as a composer works on the power of small, strange twists and artful arrangements. He builds tinkly motifs into roaming dream sequences and shrouds the husky, vulnerable vocals of Aby Vulliamy in haunting instrumentals.

END_OF_DOCUMENT_TOKEN_TO_BE_REPLACED

Mozart’s last opera is an awkward beast. It was composed on speedy commission for the coronation of a king (Leopold of Bohemia) and wears its moral message on its sleeve: Tito is a benevolent ruler whose knack for granting clemency â€“ the ‘clemenza’ of the title â€“ sees him ride out disaster through sheer kingly goodness. Compared to Mozart’s great operas the plot is staid, the characters flimsy and the musical forms old-fashioned. It’s a challenge for any opera company to bring it to life.

What carries this student production is its restraint. The staging is slick: huge block letters (modern sans serifs) set the scene and provide neat shifts in spacing and atmosphere. Director Ashley Dean doesn’t try to spice up the drama with gimmicks; instead he moves the cast in stark, striking poses that look good and leave them room to sing. Likewise conductor Tim Dean focuses on drawing graceful lines rather than fancy flourishes from the score.