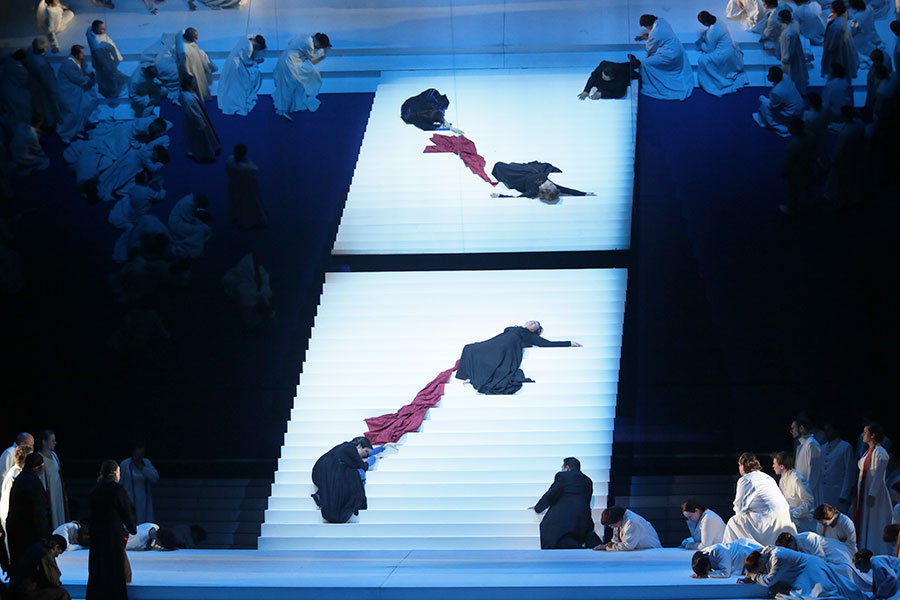 Hector Berlioz’s Les Troyens. A tale of one nation invading another on dubious grounds and the follies and tragedies of war that ensue. There is a grim kind of irony in St Petersburg’s Mariinsky Theatre bringing this of all operas to Edinburgh in this of all years. The huge production is financially supported by an ill-timed UK-Russia Year of Culture 2014. The Mariinsky’s artistic director is Valery Gergiev, long-time prominent supporter of the Russian president Vladimir Putin. In 2011, Jonathan Mills, director of the Edinburgh International Festival, appointed Gergiev the festival’s honorary president â€“ a mainly symbolic position at the head of a festival that was set up as â€œa platform for the flowering of the human spiritâ€ in the aftermath of the Second World War. Whether Gergiev should remain in this position is a question that surely needs to be addressed by Mills before his final year as EIF director is out.

Political ethics aside, the Mariinsky’s production of Les Troyens is rather good. I saw it in St Petersburg at the White Nights Festival in May and found it absorbing; the five long acts mostly flew by. There is no point trying to avoid the epic in this opera. Berlioz’s problematic late masterpiece is huge in so many ways; to underplay the grandeur would just be perverse. Berlioz intended to write the work all his life, having been wowed by Virgil’s Aeneid as a boy, and when he finally came to it in the latter half of the 1850s he poured all of his creative powers into the heavy libretto and vast score. The result is a sprawling, sumptuous mythical universe, bursting at the seams with pomp and pathos. At around five hours of music it’s really two operas rolled into one: the first part tells of the fall of Troy and the death of Cassandre, the second of the Trojans in Carthage and the doomed love between Didon and EnÃ©e.

For all of that, the Mariinsky’s production manages to be relatively light on its feet. The staging is by the Greek designer and director Yannis Kokkos, who in his programme notes draws attention to a key duality in Les Troyens between the very epic and the very human. Alongside the vast, rousing chorus scenes, this epic also contains some of the most tender and intimate music of any 19th century opera. At its heart is the portrayal of Cassandre and Didon â€“ two strong and passionate women who often appear on stage alone and unadorned. It is through their beautiful, vulnerable, dignified music that Berlioz tends to reveal his greatest compassion.

Kokkos’s approach is stripped back and quite beautiful. He anchors the action in no particular period and relies on barely any props â€“ even the Trojan horse, mainstay of virtually any production of Les Troyens, comes in the form of a spooky video projection rather than a big wooden thing (bit of a disappointment, that). In the opening act a huge mirror looms at the back of the stage, angled to reflect a painted cityscape of the ravaged Troy and to hint at further depths â€“ the underworld that awaits the senseless perpetrators of war. The mirror also accentuates the sheer volume of the Mariinsky cast in chorus scenes and the isolation of Cassandre’s solo passages, which are starkly set on an empty stage.

Cut to Carthage for Part Two and we’re bathed in Mediterranean blues and whites â€“ you can almost smell the sea breeze and the Cyprus scrub. Act Four’s doddering instrumental interludes (some of which have been cut, mercifully) feature picturesque bare-chested male dancers and women in floaty white gowns waving birds on wires. But by the close of Act Five the stage has become fully abstract â€“ just a bald-lit staircase that provides Didon’s solemn, saintly ascent toward the heavens.

Altogether it is a bravely unfussy telling of Les Troyens in which the characters, not the trimmings, make the focal point of the drama. Kokkos’s only significant hint of subtext comes with EnÃ©e’s son, Ascagne, who lurks around Didon with lusty adolescent infatuation. He furtively slips off her wedding ring and strokes the place where she has been sitting in the forest. She likewise dotes on him: it’s the son, not the father, whom she sighingly leans against during Act Four’s nocturnal scene with its ecstatic, ominous flute solo.

Eventually EnÃ©e shoos away the boy for the famous love duet, but in the performance I heard it turned out to be a deeply unerotic scene. The fault rested with Viktor Lutsyuk, the shouty tenor playing EnÃ©e (little wonder Didon takes more interest in the younger generation). In general the cast in St Petersburg was uninspiring: thick, heavy voices, stilted acting, diction more Russian than French. Yulia Matochkina’s noble, poignant Didon was the exception, captivating to the end. These are not the singers coming to Edinburgh, though; the Mariinsky brings two new all-Russian casts, few of them names known in the UK.

There should be no lack of sonic opulence thanks to the unmitigated bulk of the Mariinsky company. The chorus makes a colossal sound: huge decibels, forest-deep hue. The orchestra hasn’t always been known for technical polish but it sounded extravagantly rich in parts â€“ the low strings, particularly, were beefy and luxurious and the winds were nimble enough to conjure Berlioz’s flightiest passages.

Gergiev conducts it all with a brisk, irrepressible sweep. He’s at his best in the big chorus scenes when he summons an almighty sound and buzzing energy from his amassed forces. Elsewhere I wanted more detail, more tenderness, more care. Still, at the end of the St Petersburg performance it was Gergiev who got the biggest cheers of the night. The production was staged in the new Mariinsky II, officially opened last spring by Putin himself to a tune of Â£450m. It’s a bling edifice, all shimmering onyx and floor-to-ceiling glass facades. At the intervals the audience munch cream pastries and caviar in lofty foyers, gazing at the lovely, faded old Mariinsky across the canal.

Les Troyens is at the Festival Theatre, Edinburgh, on August 28-30