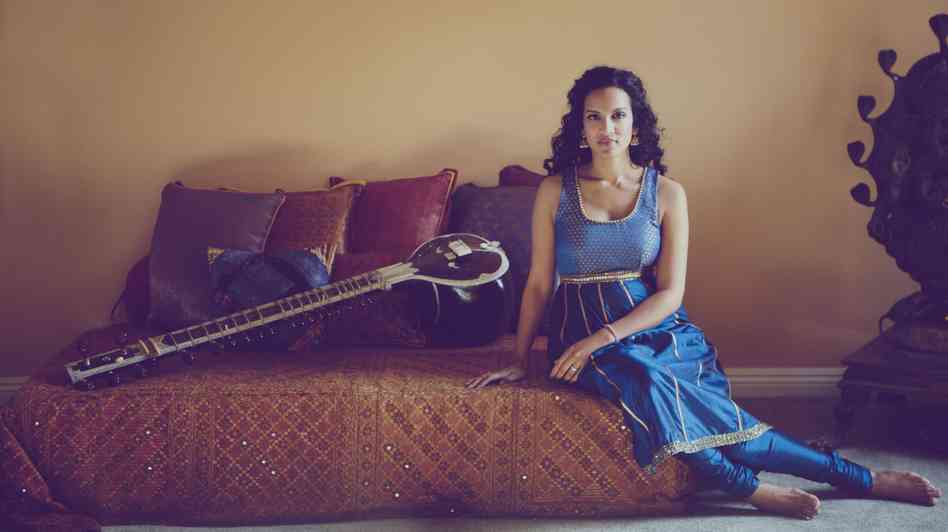 There is no real way to cram a raga. India’s classical music is traditionally passed down from guru to pupil over decades of tutelage that encompasses mind, body and soul â€“ it’s a near-spiritual relationship that cannot be replaced by books or online tutorials. The great sitar player Ravi Shankar once wrote that he felt â€œappalledâ€ when he heard of students learning from a tape: â€œhow can anyone even compare the foundation and solidity of knowledge learned for years directly from a guru to today’s hourly lessons and computer culture?â€

Anoushka Shankar learned the good old way. She began studying the sitar with her father at the age of seven; in terms of musical lineage, it doesn’t get much more direct. Despite the awkward physical demands of the instrument she took to it with virtuosic flair and was soon touring the world with Ravi. By the time she was in her late teens she was taking on her own solo engagements, and seven albums later she has forged a new path in sitar music, deftly blending ancient raga forms with flamenco, electronica and blues.

Ravi Shankar died just over a year ago, prompting a deluge of tributes to the mastery of his traditional sitar playing and his impact on Western music. As a friend to musicians from countless stylistic backgrounds â€“ The Byrds, The Beatles, Yehudi Menuhin, Zubin Mehta â€“ Shankar introduced his instrument and its philosophy to a global audience. But he also absorbed Western music into his own lexicon. This week Anoushka plays her father’s second concerto for sitar and orchestra, Raga Mala, with the Royal Scottish National Orchestra and the Estonian conductor Kristjan JÃ¤rvi.

â€œPlaying with an orchestra is always a pleasure,â€ she tells me in immaculate vowels that reveal an upbringing spent between London, California and Delhi. â€œIt’s an occasional part of my career and one that I always return to with joy.â€ She loves the scale of the experience, she says â€“ â€œthe vastness of orchestral music, being surrounded by so many musicians on stage, which can really sweep me up.â€ The sheer novelty factor of the sitar-orchestra combo can be a handy way in for listeners and musicians alike: â€œit’s quite an unusual set up, so whatever cultural side the audience is coming from there’s usually a strong sense of curiosity. And curiosity is a lovely place to start with any artistic experience.â€

Anoushka has this music in her blood, but the Shankar sitar concertos are still a serious challenge. First off, there’s the question of projection. The sweet-voiced sitar is not loud enough to be heard over a full orchestra in a large concert hall, so it needs a degree of artificial help. To amplify a soloist in the midst of 70-odd acoustic instruments is easy to blunder and no small feat to get right. That’s why Shankar always travels with an assistant who knows the concertos inside out and has â€œthe magic touchâ€ that can capture the best of the sitar’s gentle, intimate voice.

For the orchestra, the challenge goes deeper than logistics. At the heart of the raga tradition is improvisation, but it is no free-for-all. A sitar player might take a lifetime to absorb the formal structures well enough to be able to play freely within them; an orchestra usually rehearses a programme for a day or two. Anoushka points out that her father’s concertos don’t ask the orchestra to actually improvise. â€œThe scores provide a framework,â€ she says, â€œand my father wrote out the raga rhythms meticulously so that Western musicians would be able to play them. For example, a cycle of 11 beats might be subdivided into bars of three and four. I memorised these concertos from recordings, so it’s been strange coming back to the score. Somehow seeing the music on paper pins down something that has just feels a part of me.â€

Shankar says that she loves the meeting of raga traditions and orchestral music. â€œI’m drawn to to orchestral music because it is a parallel classical world to my own. I spend a lot of time experimenting with electronica or blues, but here there’s a seriousness, a respect for tradition, that I understand and feel comfortable with. In India we might call our music spiritual in a way that not all Western classical musicians would, but there is certainly a shared sense of reverence.â€

The first half of the RSNO’s concert duly nods toward the spirituality of raga with ‘holy minimalist’ music by the Estonian composer Arvo PÃ¤rt: his Fratres and Third Symphony. Shankar admits that she is â€œquietly very relievedâ€ that Raga Mala has not been programmed next to Scheherazade: â€œyou’d be amazed how often that coupling happens,â€ she says through teeth gritted. It’s easy to understand the irritation. Rimsky-Korsakov’s orchestral showpiece is full of sumptuous, glittering music, but it is a very 19th century image of exoticism â€“ an outmoded version of East-meets-West that today’s orchestras should know better than associating with Shankar’s concertos. (Well done to the RSNO for not doing so). The point is, Ravi Shankar’s orchestral music isn’t fusion or appropriation or any attempt at stereotyped East-meets-West. In Raga Mala, sitar and orchestra both retain their dignity because the music celebrates the traditions of both.

Anoushka says that she intends to write orchestral music herself one day. â€œI had very minimal classical piano training as a child, but the little I did have has given me the tools to understand the scores to my father’s concertos. And the writing I’ve done for my recent albums has helped build up to a stage where I might be ready to write for orchestra soon…â€ Watch this space. For the moment, though, she has her hands full. She and her husband, the film director Joe Wright, had their first child in 2011 (they named him Zubin after the Indian conductor Zubin Mehta), and Anoushka has already released two new albums and done two world tours since then. Later this year she curates a four-day festival celebrating the Indian poet Rabindranath Tagore at Shakespeare’s Globe in London â€“ she has not, she laughs, let motherhood hold her back from her creative pursuits. Meanwhile she continues to champion her father’s music, and the legacy that he passed down to her.

Anoushka Shankar plays with the RSNO in at the Usher Hall, Edinburgh, on Friday and Glasgow Royal Concert Hall on Saturday