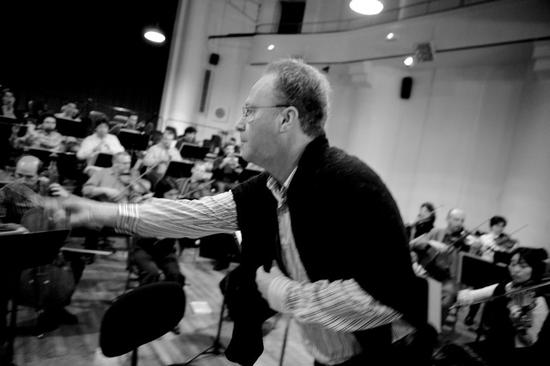 The Scottish Chamber Orchestra are a fussy bunch when it comes to conductors. They have to be: they are an ensemble who pride themselves on playing like a big chamber group rather than a little orchestra, meaning that their sound and spirit run on some ineffable chemistry between every musician on stage. The right conductor can really fuel that energy (witness their dynamism under current principal conductor Robin Ticciati); the wrong conductor can dampen it cold.

And so recruitment is a serious business, and the recent announcement of a new principal guest conductor â€“ the flamboyantly original Frenchman Emmanuel Krivine â€“ is worth a moment’s mulling over. Krivine follows in illustrious footsteps: the legendary Sir Charles Mackerras, no less, whose legacy will forever be etched into the SCO sound. What will the Frenchman add to the mix? On paper his track record is solid if understated. A violinist before he became a conductor, he is former director of the Orchestra National de Lyon, current director of the Luxembourg Philharmonic, principal guest with the Barcelona Symphony and founding-director of the Parisian-based period instrument orchestra La Chambre Philharmonique. He has a reputation for vivid orchestral colour and left-field interpretations.

I meet Krivine in Edinburgh while he’s preparing to conduct Beethoven’s Ninth Symphony with the SCO. He’s an impeccably suave 67-year-old, navy cable-knit tied across his shoulders with that casual chic that only the French can muster. I’ve been told that he doesn’t speak much English and would like to do the interview in French; as it turns out his English is perfectly workable, but it’s his extravagant turns of rhetoric â€“ the outlandish metaphors and roaming, quasi-philosophical musings â€“ that don’t so easily translate.

We start by discussing why he enjoys working with the SCO. That’s simple, he says: they play well; they have a familial ambience; they are very relaxed. â€œThe quality of an orchestra is all about their attitude of listening,â€ he says, â€œand the SCO are good listeners. Andâ€ â€“ he holds up a finger to emphasise the point â€“ â€œthey actually like music. You can’t always say that. Even the grandest orchestras can become routine. The SCO hasn’t become routine. They are very open-minded. They don’t judge. That’s very nice for me. I don’t have to be a pedagogue. I can just play music with them.â€

This last point lies at the heart of Krivine’s approach to conducting. In a profession that is historically steeped in hierarchy, Krivine is determinedly egalitarian. â€œI think that your English language gets it right,â€ he explains. â€œThe word conductor understands the role very well. In French the term is chef d’orchestre, which implies a social role rather than a functional one. In German it’s Dirigent, which is too directive. But to conduct â€“ that term can be devoid of ego.â€ He also stresses the difference between a podium and pedestal: the first is functional, simply a tool to allow the conductor to be seen by the orchestra. â€œMais un piÃ©destal? That is altogether a more loaded notion.â€

Yet even Krivine can’t entirely avoid the social context of his profession. Later in the conversation he explains why he thinks the culture of conducting has evolved in recent decades. It began with the rise of feminism in the 1960s, he says, when â€œthe West’s rampant machismo began to be regulated. The work ethos of going faster and stronger all the time began to change, and that had an influence on the mentality of conducting. It became more about the music, less about machismo.â€ I triple-check my translation of his metaphor here: â€œto have an erection sometimes is a good thing,â€ he says, â€œbut a permanent erection is a fallacy.â€

It’s interesting that Krivine illustrates his point with the kind of phallic symbolism that seems long outmoded. Does anybody really still think of the conductor’s baton in these terms? â€œI think it’s the opposite,â€ he stresses. â€œThe conductor has no instrument â€“ in a way he is castrated (symbolically speaking, let’s hope!) and that castration allows him to give birth to the music. In fact, he doesn’t even give birth: the conductor is there to deliver the music that the orchestra has given birth to. The conductor is just the midwife. If you see the baton as phallic, the music can only come from authority. But conducting should have nothing to do with authority.â€

Did beginning his career as a violinist (and a very good one â€“ he won the Premier Prix of the Paris Conservatoire at the age of 16) contribute to his determination to conduct without authority? â€œPas vraiment,â€ he replies with a wag of his finger. â€œIf I said yes, that would imply that an organist couldn’t do the job as well. Conducting comes down to listening.â€

In fact he originally wanted to be an organist, not a violinist, but jokes that he came from a Jewish family â€œwho thought that if I played organ I’d convert to Catholicism because of all the churches.â€ He stopped playing violin in 1981 after a serious car accident, but had by then already begun conducting â€“ an encounter with Karl BÃ¶hm in Salzburg in 1965 had shifted his focus towards the podium. â€œHearing BÃ¶hmconduct Bruckner’s Seventh Symphony, then I understood the miracle of the profession,â€ he says.

Krivine describes the role of principal guest conductor as â€œun privilÃ¨ge Ã©norme. A principal guest is a tourist who returns more often. Some tourists come to Edinburgh, look at the castle then go straight to MacDonald’s. That’s not my way of doing it. I like regularity so I can go further and deeper each time I return.â€ But the position also allows him to keep a certain healthy distance, he says; to avoid getting mixed up in the private lives of the orchestra’s musicians (he even suggests that his lack of fluent English sometimes comes in handy in this respect). â€œThe role makes it possible to devote ourselves fully to the thing that unites us: and that’s to say the music.â€