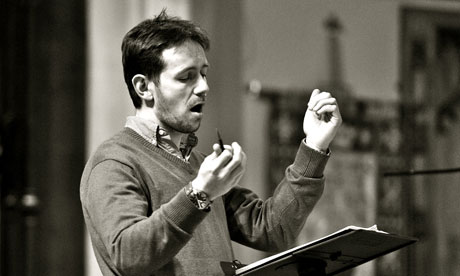 Countertenor Iestyn Davies claims that, based on the music he’s singing in any given concert, he can predict the precise words a critic will use to describe his performance. For example: if he’s playing the Voice of Apollo in Benjamin Britten’s opera Death in Venice, “all I have to do is turn up and the critic will write ‘otherworldly’. If it’s Handel, the word ‘florid’ invariably crops up…”

Davies is laughing as he tells me this, well aware of the fact that by earning these adjectives he’s clearly doing his job right. His voice-type – “approximately the range of an alto, sung by a man in his falsetto register or ‘head-voice’“ – remains a speciality, and composers of all periods have written for it with specific connotations in mind. Handel’s alto-range male characters are bold, heroic, dazzling and, yep, florid. For Britten, the countertenor tends to represent the mythical or the supernatural: think of Apollo, conjured by Aschenbach in a choloric fantasy, or Oberon, the darkly powerful fairy king in A Midsummer Night’s Dream. ‘Otherworldly’ is exactly the effect that’s required.

Davies is the latest in a line of star British countertenors. The voice-type isn’t exactly a crowded field; there are countless professional sopranos or tenors, only a handful of countertenor soloists. The 19th century fashion for big, booming voices didn’t do much for their popularity and the voice-type might have all-but died out had it not been for the 20th century’s early music revival and a couple of key champions who renewed the repertoire. The dashing Alfred Deller kick-started the countertenor renaissance in the 1940s and 50s (Britten and Tippett both wrote music for him), closely followed by James Bowman. Today’s batch of iconic voices includes the Americans David Daniels and Bejun Mehta, the German Andreas Scholl, the Mancunian Robin Blaze, all now all in their 40s. Of the next generation, two superb British countertenors stand out for me: Tim Mead (he made an unforgettable Orlando for Scottish Opera in 2011) and Iestyn Davies.

Of the pair, Davies is the flashier singer. His voice is plush, versatile and immensely expressive. He sings everything from ancient music to the spanking-new, from the most intimate lute-songs (his gorgeous latest album explores the arch-melancholy of John Dowland) to the most lavish opera productions at New York’s Metropolitan and London’s Covent Garden.

“I don’t consciously shift my approach depending on what music I’m singing,” he says. “And I’m definitely not a puritan. I’m of the belief that if you put enough thought into the words, what comes out will carry the right expression. Good singing is simply good singing. I once overheard a violinist in a baroque ensemble telling his colleagues that they were ‘using up their allotted slurs’. That’s the opposite of how I want to approach music. If a phrase needs a slur, I’ll give it a good slur.”

Part of that flexibility comes, he reckons, from learning to sing in a chapel choir. Davies went to school in Cambridge and was a chorister at St John’s College. “We sang acres of music every week “something by Tallis and something written yesterday within the space of one service. The choir master taught us to be professional about it all, not to be pedantic about how to articulate some trill or arcane renaissance ornament. I mean, that approach can be interesting for about ten minutes…”

I suspect he’s being slightly disingenuous here: clearly Davies knows plenty about historically-accurate ornaments – listen to any of his Handel, Bach or Dowland discs. The point is more that he prioritises full-blooded expression and a beautiful sound above academic detail. For purists that might sound reckless; for most audiences it makes his performances irresistible.

Those who follow Davies on Twitter will be familiar with the cheeky quips. The social media stuff comes naturally, he says; he’s a chatty and opinionated kind of guy (which explains our roaming two hour phone interview, including a half-hour on coffee nerdism alone) and he’s fairly prolific when it comes to keeping his fans updated. “Of all art forms, classical music needs more of a visual presence,” he says. “I’m not talking about dumbing things down; just a presence. It would change things overnight if classical musicians were on the telly more, but I can’t really control that. So social media is me doing my bit for accessibility, I suppose.”

There’s another motive to it, too. Davies says that he is “aware of the shelf-life of a countertenor” – not words I expected to hear from a hotshot 34-year-old who’s among the most successful singers of his generation. “Thing is, our repertoire doesn’t change,” he explains. “Other voice-types mature into heavier roles as the singers get older” – sopranos graduate from girlish roles like Zerlina (Don Giovanni) and Pamina (the Magic Flute) to more fulsome Verdi, Strauss and Wagner – “but countertenors have nowhere to go. Plus there are fewer of us, so a decent new countertenor will always make a splash. I’m aware that I need to maintain a profile.”

He isn’t maudlin about it, just matter-of-fact. “As long as I take time to rest then my voice should stay in good shape,” he says. “I’m probably less naÃ¯ve and less adventurous than I was a few years ago. Certainly I’m more careful about not travelling on the day of a concert, that kind of thing.”

Which partly explains why we haven’t heard him with the Dunedin Consort. John Butt’s excellent period-instrument ensemble has a practise of using a small group of singers to make up both the choir and the soloists when performing Bach’s passions or Handel’s Messiah. That might be authentic, says Davies, but it can take a heavy toll on singers, especially countertenors. â€œOur voices just aren’t as hard-wearing as others.â€

If that’s been a limiting factor for Davies and the Dunedins in the past, this weekend he’s in Scotland to perform solo Bach: two of JS Bach’s cantatas for alto – BWV 54 Wiederstehe doch der Sunde and BWV 170 Ruh, Beliebte Seelenlust – plus a tiny gem of a lament called Ach dass ich wassers gnug hÃ¤tte by Johann Sebastian’s older cousin, Johann Christian Bach.

Incidentally, if you want to pre-empt the reviews on this one, think along the lines of “sublime”. JS Bach often used the alto range to represent the holy ghost (the bass expresses Christ, the sopranos soar upwards to all things heavenly). Some of the composer’s most sumptuous, tender, soulful arias are for alto – think of Es ist vollbracht from St John’s Passion or Erbame dich from St Matthew’s Passion. For the listener they’re, well, sublime. For Davies? “Bach is gorgeous to sing.”

Iestyn Davies and the Dunedin Consort are at the Queen’s Hall, Edinburgh, on June 22, and the Wigmore Hall, London, on June 24