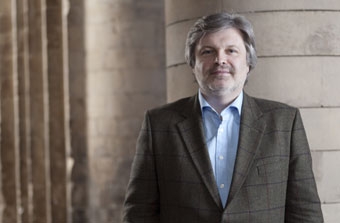 First published in The Herald on 2 October, 2013

The first striking detail about James MacMillan’s new piano concerto is its name: The Mysteries of Light. This is the Scottish composer’s third work for piano and orchestra, and was first performed in 2011 by the Minnesota Orchestra with conductor Osmo VÃ¤nskÃ¤ and pianist Jean-Yves Thibaudet. Now Thibaudet joins the Royal Scottish National Orchestra for the concerto’s Scottish premiere on Friday, and I asked MacMillan to talk us through what we should expect of the piece.

First off, what’s behind the name? â€œI’ve always been intrigued by past practises that have fallen into disuse,â€ MacMillan explains. â€œPractises of basing music on the shape of the rosary, like Biber’s Mystery Sonatas. I thought that it would be interesting to revisit the form in our own time.â€

The 17th century composer Biber based his Mystery Sonatas on the traditional Catholic mysteries: specified points from the life of Christ that are grouped as ‘sorrowful’, ‘joyous’ or ‘glorious’ and used as a basis for reflective prayer. In 2002 Pope John Paul II added a forth group, the ‘luminous mysteries’, gathering moments in the New Testament that deal with light, both in the physical sense and as a metaphor for enlightenment.

MacMillan says that â€œwhether or not you accept the importance of it, these mysteries were fresh in my mind when I was writing the concerto. They were points of reflection for my music in the way that the others would have been for Biber.â€

So how does the imagery work its way into the score? MacMillan talks of â€œa kind of fusionâ€ between concerto form and a symphonic poem. Some of his previous concertos have been entirely abstract â€“ the Violin Concerto, for example, and the recent Oboe Concerto â€“ while others, such as the clarinet concerto called Ninian, have had an openly descriptive quality. He says that The Mysteries of Light is more akin to the latter.

â€œI like the idea of being able to paint pictures in sound in the 21st century. I try to capture the essence of a moment or an image. Sometimes it can be in quite childish ways. That’s the joy of composing: it keeps alive a childishness that composers should never really lose.â€

That childishness might play out as the sound of water in the River Jordan or a â€œquasi-folk danceâ€ running through the concerto. Or it might be less specifically pictorial. â€œSometimes purely musical considerations can come to the aid of telling a story. The Catholic idea of transfiguration is also a musical idea of itself â€“ you can play with music to transform it into something else.â€

MacMillan describes the style of the new piano concerto as strikingly different from the previous two. Instead of The Berserking’s rocky battleground between soloist and orchestra, here the dialogue is softer, using the palette of the orchestra to complement what the piano is doing. â€œHigh-speed filigree in the piano can be amplified by instruments to make a kind of meta piano. It’s quite a colouristic piece, different from the grind of the first one and the almost slapstick nature of the second.â€

I ask whether the piano represents a certain voice or character, but he says that â€œit wouldn’t be rightâ€ for him to lay down a single way of interpreting the piece. â€œSometimes the composer is the least able person to explain what his intention is.â€

Does it matter if the audience doesn’t recognise the Catholic references in the music? â€œI don’t think so. Obviously this isn’t liturgy; it’s not part of a religious ritual, though in many ways it’s shaped by both religion and ritual. It has to work in a neutral, secular space where most of the audience won’t have any great experience with the rosary. At the premiere in Minnesota some people understood everything, all the little signs and signals. Did they therefore get more out of the music than someone who didn’t know? Maybe that question has to be kept open.â€

MacMillan does acknowledge that it helps if his performers can relate to his sources of inspiration. He says that he â€œhad Thibaudet’s French repertoire in mindâ€ when he wrote the piece, and describes Olivier Messiaen â€“ also a deeply Catholic composer â€“ as â€œa presence that I can’t get rid of whether I want to or not, especially when I write organ music. In fact, I took pains to avoid writing organ music for a while for that very reason.â€ The fact that The Mysteries of Light is overtly colouristic is perhaps a reflection of who MacMillan was writing it for â€“ a reflection of the French soundworld that is deep in Thibaudet’s fingers.

But there’s another soundworld at play, too. Osmo VÃ¤nskÃ¤, the Finnish conductor who commissioned the concerto, has long been a champion of MacMillan’s music. â€œLike him, I’m a musician of the north,â€ says MacMillan. â€œWhen I hear music by other Scots, there are links with Nordic composers in a way that perhaps even English don’t have.â€ It all comes down to Sibelius, he says. â€œSibelius is the the gold standard that all us northerners reference. There’s an attraction to cragginess and an austere beauty, a darkness in the orchestral palette.â€ He laughs. â€œThere is a northern soul, tempered in my case by something Gaelic and Catholic. Quite the mix!â€

The RSNO and Jean-Yves Thibodet perform James MacMillan’s The Mysteries of Light at Edinburgh’s Usher Hall on Friday and Glasgow’s Royal Concert Hall on Saturday.

More coming up from James MacMillan

On October 7, MacMillan launches a new event in Cumnock in collaboration with violinist Nicola Benedetti. He’s not allowed to say more until then, â€œbut I can tell you that it’s really exciting. It’s something that could absorb me for the rest of my life.â€

On January 11, he conducts the BBC Scottish Symphony Orchestra in a full programme of his music, including some overdue world premieres. â€œI started going through pieces that I’d completely forgotten about,â€ he says. â€œI’d presumed that I wouldn’t want anything more to do with them, but realised that one in particular was very important to me.â€ It’s a 25-minute piece called The Keening that he wrote in the late 1980s as part of his PhD work. â€œI can see in it all the things I explored in Tryst, The Berserking, The Confessions of Isobel Gowdie. I’ve decided to give it an outing.â€

He describes rediscovering music written by a younger self as â€œlike reading old letters: I can see myself in it, but my priorities have shifted. If I was embarrassed by these pieces I wouldn’t let anyone near them, but actually I’m quite thrilled by them.â€