John Purser names his highland cattle after early Scottish composers. Over the years there has been Robert and Carver, Tobias and Hume. When I arrive at his croft in south-west Skye, he brightly informs me that the beef casserole stewing in the bottom of the Aga is, or rather was, Robert. “You do know Carver’s 19-part motet?” he demands before I’m through the door, and only after an extended and animated analysis of the 16th century choral masterpiece O bone Jesu am I permitted to sit down and eat.

This is pure Purser: a rambunctious and wildly loquacious composer, historian, poet and crofter, as infectiously passionate about mackerel fishing and cattle herding (he takes me out to do both during my visit) as he is about the ancient history of Scotland’s music. And I mean very ancient. Purser has composed music for iron age carnyx and for bronze age horn. He is currently all fired up over reconstructions of a Scottish bell-ended flute from 1600, images of which were spotted in ceiling paintings at Crathes Castle.

For any regular listeners of BBC Radio Scotland over the past 25 years, Purser’s voice will be the sound of Scotland’s Music. The series first emerged in 1992 as a mammoth 30-part affair, each programme lasting 90 minutes and detailing the origins of Scottish music from early Christian bells, gongs and chants right up to (though a little less authoritatively) the Glasgow pop explosion of the 1980s. It is unfathomable that today’s BBC Scotland would commission a music history series of such glorious scale and scope, yet a second series was made in 2007, with a further 50 programmes and an updated edition of the colourful accompanying book.

“Scotland’s Music utterly took over my life — twice!” Purser exclaims, polishing off a meal of casserole, carrageen pudding and bog myrtle home-brew. He throws open a door at the back of the kitchen and reveals the “inner sanctum” that is his study. The walls are stacked to the ceiling with records, tapes, binders and books. He points out somebody’s unpublished PhD thesis on the music of William Wallace and swathes of archive material on Erik Chisholm, the great modernist Scottish composer whose biography he wrote in 2009.

Ushering me into an armchair next to the peat fire, he takes a seat at his computer from where he can seize upon musical examples when the conversation requires, as it frequently seems to. He reckons to owning the country’s most extensive individual collection of Scottish classical music recordings. I don’t doubt it. 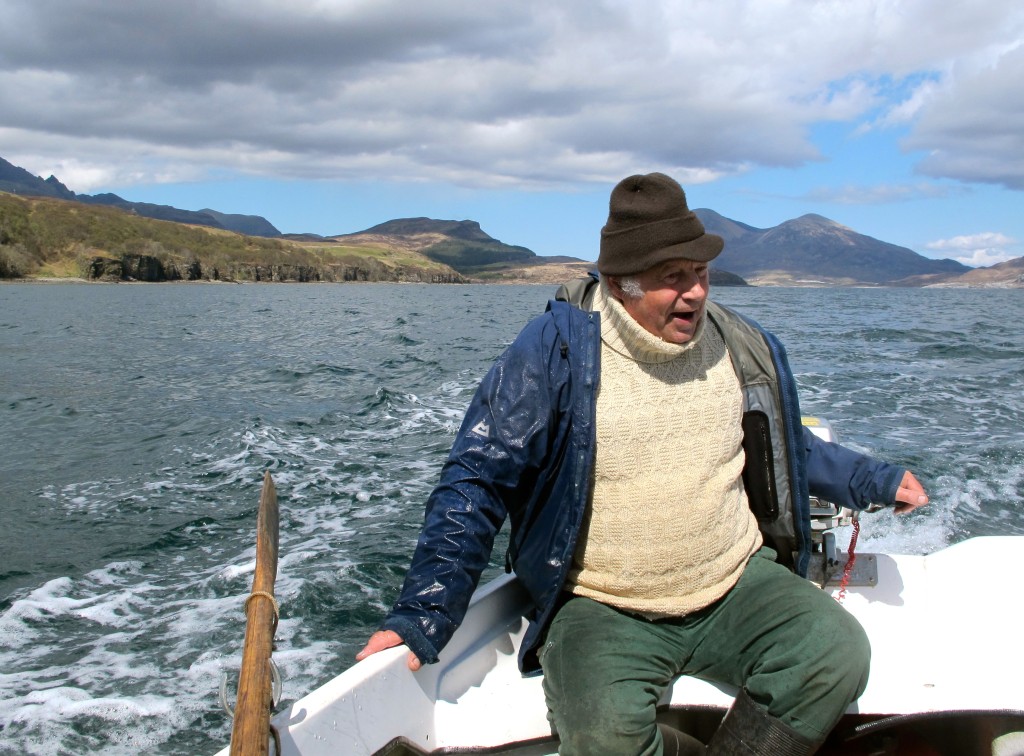 But for all his pioneering work on ancient Scottish music, Purser’s heritage is in fact Irish. He was brought up singing and playing Irish airs at the piano — “I was imbued with Irish music, some of it quite obscure because my upper-middle-class Irish protestant family was very supportive of the cultural revival. Though it was all proper piano stuff, you know, and you certainly didn’t get to sing in Irish.” His mother also taught him Scottish songs, contained in Victorian ballad collections and leather-bound anthologies.

After studying English literature at Glasgow University he eked out a living writing radio plays and teaching evening classes on opera and classical music. He regales me with long stories, complete with accents and big hand gestures, about Dumfriesshire station masters who were closet opera experts and students who called him up decades later to discuss harmonic epiphanies in the Schubert Cello Quintet.

He spent a spell in Italy while his first wife, the composer Wilma Paterson, studied with Luigi Dallapiccola in Florence. Eventually — “to prove to my second wife Bar that I could actually hold down a real job” — he secured an archiving position at the Scottish Music Centre. “And that meant I started to listen to what was in the Scottish Music Centre archive. And when I first heard pieces like Carver’s 19-part motet, buried somewhere on the B-side of a cassette… Ha!” He slaps the desk hard, causing the CD shelves above me to wobble a worrying amount. “My head exploded! I had never heard anything like it! After that I literally wouldn’t let anyone leave the institution until they had listened to it, repeatedly.”

And so it was that Purser immersed himself in Scottish music history, and increasingly in traditional music culture. While making the radio series he became fascinated in all things Gaelic, and later studyied the language at Sabhal Mòr Ostaig, the Gaelic college on Skye, after he and Bar finally gave up their Glasgow home and moved to the island full-time. In 2006 he was appointed director of the institution’s Gaelic music course and nearly a decade later, his spoken Gaelic is, he grins, “nothing if not gung-ho!”.

Meanwhile he has always self-identified as a composer. He trained with Frank Spedding, Hans Gal and Michael Tippett, no less, and his music ranges from orchestral suites to solo violin pieces and — most typically — chamber works for weird and wonderful combinations. He has written trios for triple pipes, clarsach and clay drum, duos for bassoon and the Maori taonga puoro. “The circus cart trundles on!” he chuckles, shaking his head at the commercial direness of the configurations.

Commercially dire, maybe, but Purser does want his music to be heard, and he recently self-released a set of albums — Circus Suite, Bannockburn and Dreaming of Islands — surveying his works from across various decades and genres. He explains the decision: “involved as I am in the traditional music world, I was seeing students self-releasing a CD just a couple of years after graduating. And I thought, ‘bloody hell, if they can do that at the age of 25, and here I am, an ancient bugger in my 70s, and I’ve done nothing for myself… Well, why shouldn’t I?’”

“I know it’s not so much done in the classical world,” he continues. “We are supposed to wait for a label. But I knew I would wait until death for a label. I’m not a full-time composer and my body of work isn’t vast. Plus let’s face it: I write for such stupidly obscure instrumental combinations. A piece for carnyx, soprano and percussion? It’s not exactly going to emblazon my name in the world!”

Yet the albums should be listened to for more than novelty interest. These works are heartfelt, clear, rugged and peculiar, sometimes stark and often filmic. The influences they contain are unmistakable — a musical summation, almost, of Purser’s free-wheeling career. There are pipe pibrochs and baroque forms, modernist studies and Gaelic poetry. And, rarely far from the surface, the seas and mountains of Skye.

John Purser’s recordings are available at his website, www.johnpurser.net