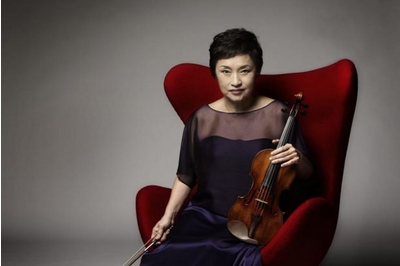 First published in The Herald on 26 November, 2014

Kyung Wha Chung is back. “It’s hard to believe,” says the 66-year-old violinist, cheerfully slapping the coffee table as if to confirm that yep, all of this is real. “In some ways I feel like I haven’t been away, but on the other hand I had an incredibly enriching life while I was gone. Coming back onto the stage was completely unexpected. But here I am! Ha!” She lets out a raucous, hearty laugh. Chung is a lot of fun to interview. She’s feisty, spontaneous and caring; at one point she leaps up to wrap a jumper around my shoulders because she thinks I look chilly. In recent years she has been through the kind of painful experiences that might dampen the most resilient spirits, yet today she is as sparky and passionate as her classic fiery performances.

One of the great performers of the past century, Chung was born and raised in South Korea and moved to New York at 13 to study with the legendarily uncompromising teacher Ivan Galamian. Her major career breakthrough came in 1970 when she stood in last-minute for Itzhak Perlman in a concert with Andre Previn and the London Symphony Orchestra. She wore a flame-red dress and played Mendelssohn with a fearless attack that is still thrilling to watch on video. The following day she was flooded with international concert offers.

Chung describes her former self as a shy young woman; where, then, did that fearless bravado come from when she walked out in front of an audience? “I always loved being on stage,” she says. “I could do anything there – I could express myself. The violin gave me a voice I didn’t otherwise have. It was my friend. I could talk to it and it would talk back. It told me incredible stories. What more could a child want?”

The command to walk on stage as if she owned the place came from her mother. “She was a gutsy woman,” Chung says. “In polite company she could appear quiet and sweet, but actually she was like a general. She used to tell me, ‘when you go on stage you are the best. You tell them exactly what you want to say.’ To me that always felt totally reasonable!”

Chung talks a lot about her mother, who does indeed sound like a formidable woman. She had seven children who played chamber music together every day. She would organise picnics every week and pack the family off to the beach each summer. “Mum would put up an army tent on the beach and that’s where we lived for two months every year,” Chung remembers. “We played music in the headlights of the jeep. I have wonderful memories. I wouldn’t say it was abnormal – abnormally happy, maybe.”

Perhaps it isn’t surprising that Chung was committed to creating her own version of a balanced family life when the time came. At 32 she married and had children – a decision that didn’t go down well among some of her teachers and peers, who disapproved of her shift in priorities. Chung describes the moment as “like a train going full speed and suddenly you put the breaks on and jump out and say ‘Oh my god, what is my life really about?’. But it was the best experience to put myself through because from the age of 32 I looked at my life differently.”

A couple of decades later she suffered a severe strain in her left index finger and couldn’t play the violin for five years. During that time she lost her mother and her sister. Many people might have chosen to step away from the international career at that point, but Chung’s outlook seems indelibly positive. Part of that is her strong Christianity, she says, citing the Old Testament parable of Job who loses everything as a test of his faith. Part of it is a robust character clearly inherited from her mother. “She lived through the most difficult times in Korea: times when things couldn’t get any worse, only better. My life was different, of course. Everyone wanted to be me. They had no idea what it was like to be me, but still they wanted to be me. Everyone’s life is filled with pain and difficulty, so the key thing is outlook. Even the most difficult periods can be a source of strength.”

Eventually Chung’s index finger recovered and she began performing charity concerts around Asia and Africa. This month she returns to the UK for the first time in over a decade for concerts in London, Liverpool and Perth.

Her decision to return to the main stage is simple, she says: profile. “In order to help charitable causes I have to be visible. I have to have strong leverage. I don’t need a career; I don’t want a career. But I do want to help people. And that requires my name to be strong. It’s an unusual situation for somebody of my age to start playing recitals again. I’m perfectly aware of that!”

Thankfully the index finger hasn’t caused her any more grief but she has recently had trouble with her left thumb. In September she tried steroid injections but to no effect, so her doctor decided to operate. “I don’t think there are many surgeons who would want to put a knife on my hand,” she says in something of an understatement. “But this guy, who is 71 years old, is like a serene Buddhist monk. He knew that he had to clean out the joint, so he operated the very next day.”

That was two months ago and Chung is determined to uphold her much-hyped UK comeback. “It’s going to be fine,” she says, wiggling her thumb as if to prove the point. “Some days I feel stronger than others but I know I’ll get through the concerts. All this, all these health problems, it’s inevitable. This is not a young body. Nobody plays for this long without problems – except maybe Ida Haendel! She goes on and on!” There’s that wonderful laugh again.

I ask how it feels to walk on stage after everything she has been through. “It’s a miracle,” Chung replies, simply. “Every time I go on stage is a miraculous blessing. Every time might be my last, so I’m sure going to make it count.”