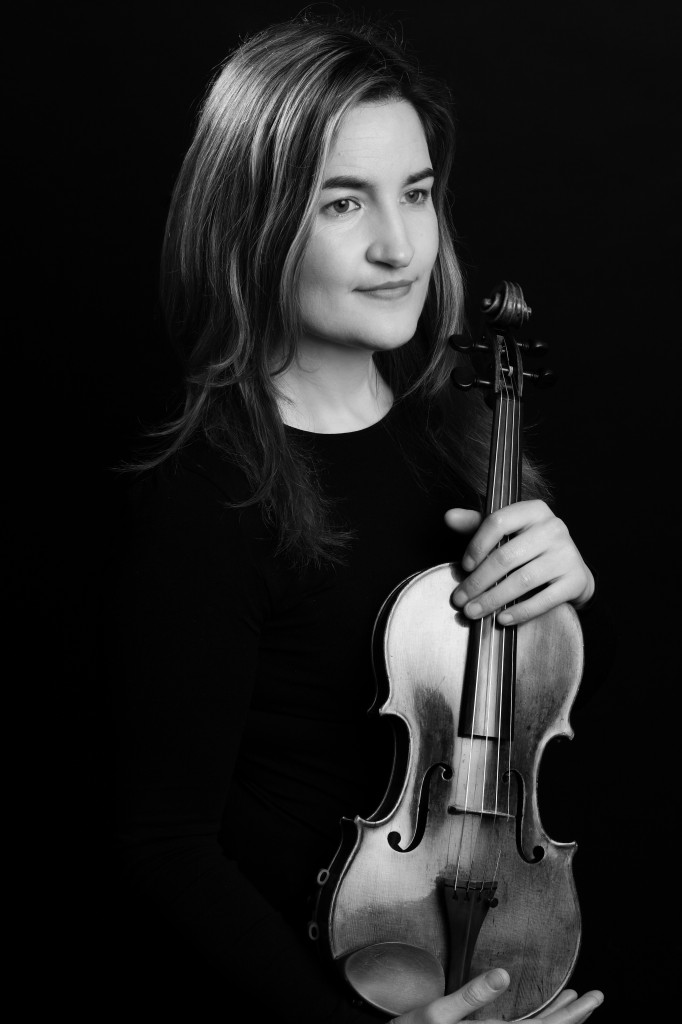 First published by The Herald on 12 November, 2014

It’s a strange business, being an orchestral leader. In simple terms the leader is the person who sits at the front of the violin section just beyond the conductor’s left elbow; who walks on stage after the rest of the orchestra is seated and takes a solitary bow; who plays violin solos when required then merges seamlessly back into the group. But there is so much more. As tends to be the case in music, the magic that elevates the mundane is essentially intangible.

Laura Samuel, who when she auditioned for the BBC Scottish Symphony Orchestra job four years ago hadn’t played in an orchestra since she was 18, says she never had a conversation about what was required. And yet anyone who has been at a BBC SSO concert in the past two seasons will know that Samuel is a rather special leader. As co-founder and 16-year member of the Belcea Quartet, her panache as an instrumentalist is obvious: she’s a commanding, flexible, stylish musician. She leads with forthright gestures that are clear but never pushy or directive, and her stage presence is simple, unshowy, amiable. Under her leadership the BBCSSO strings sound terrific – full of energy, focus, depth and charisma.

So at the start of her third season, as she prepares to play Mozart’s Sinfonia concertante alongside viola principal Scott Dickinson in Donald Runnicles’s birthday concerts this week, The Herald thought it time to ask Samuel how she’s getting on in the job.

If her stage presence is down to earth, in person she is doubly so. Instantly warm and chatty as we sit down for a coffee near her flat in the West End of Glasgow, it’s hard to associate Samuel with the darkly brooding image that exudes from the Belcea Quartet. Born in London, both her parents are violinists: father a member of the Covent Garden orchestra, mother a teacher. By the sounds of it she was a remarkably well-adjusted teenager: “I wanted to give up the violin almost as soon as I started because I thought practising was dull,” she laughs. “Mum sent me on youth orchestra courses to prove it could be fun socially, and she was so right!”

Samuel is open about her time with the Belcea Quartet, talking about experiences both positive and negative. She and quartet’s leader Corina Belcea founded the group in their first week as undergraduates at the Royal College of Music and she remembers feeling “no pressure at all initially – we took things really slowly, learned one quartet in about three months”. But the College clearly recognised a good thing and soon exempted the quartet’s members from all orchestral duty. “They wanted a quartet to showcase so they decided to make us a priority. Of course all our fellow students were pretty pissed off that we got out of orchestra…”

They studied with the Chilingirian and Alban Berg quartets and quickly became the star quartet of their generation. For Samuel it felt like a career assigned to her rather than one she had pursued herself. She had planned to study more after college but by the time she graduated the quartet was too important. “After a while I realised it had just happened to me,” she says. “The experience was brilliant, thrilling and very, very intense. Then suddenly it was 16 years later. I thought I would go mad if I spent my life with those same three people for ever more.”

She describes the personalities involved as having “quite a strong Eastern European slant,” for whom “nothing was ever good enough, nothing ever right. That’s fine to an extent, but if it’s all-consuming it gets exhausting. Of course, the intense energy and drive is part of why the group is so successful.” If you’ve heard the Belcea you’ll know what she means. Performances tend to leave you feeling drained and pummelled. The quartet’s early publicity photos show a steely foursome gazing unsmiling into the camera. It’s a long way from the cheerful person sitting across from me in the cafe.

When Samuel left the Belcea she didn’t give up chamber music altogether – “I couldn’t not play it” – and became a member of the London-based Nash Ensemble, which gives about 40 concerts per year. A couple of years later she decided it was time for another “big commitment” and turned her mind to orchestras. It happened that several leader jobs were going in the UK: the Scottish Chamber Orchestra and the BBCSSO were looking, as were the BBC Symphony Orchestra, City of London Sinfonia and BBC Philharmonic. We were lucky to get her in Glasgow.

Two years in, Samuel admits that it is “still not completely obvious” what the job entails. “People lead in so many different ways; it really depends on personality. Each orchestra I trialled with was completely different and I found the dynamic of the front eight players fascinating.”

Unsurprisingly, what drew her to the BBCSSO was its chamber sensibility. She points out that the other string principals all come from chamber music backgrounds: second violinist Greg Lawson of Mr McFall’s Chamber and Moishe’s Bagel; violist Scott Dickinson of the Leopold Trio; cellist Martin Storey of the Gould Piano Trio. “When I was on trial I would come crashing in at the wrong point but they wouldn’t mind,” she says with an embarrassed shake of her head. “Other orchestras wouldn’t have stood for it, but the BBCSSO has different priorities. It’s a natural environment for me.”

She acknowledges the intricate psychology involved, especially when it comes to mediating between conductor and orchestra. When a new conductor walks in she can tell within about a second whether the orchestra is game or not. “Once that unspoken collective decision is made it’s very difficult to reverse,” she says. “I guess my job is to try to be well-behaved – like being the good student who sits in the front of class and doesn’t chuck stuff around. I might look a bit like a plonker to my colleagues, but I’ve got to try to keep the peace.”

Was it a big shift to sit in prime position after 16 years as second fiddle? “I definitely play on the E-string [the highest string] more than I used to,” she jokes, “but hopefully in the quartet I had just as much initiative as anyone else. That’s what makes Greg [Lawson] so amazing in our orchestra: he leads from his seat too. To be honest, it’s just playing the violin no matter where you’re sitting. Now my gestures have to be clear at a distance – the timpanist has to be able to read me, not just the people sitting right next to me. But the basic moving and breathing? It’s all just music.”