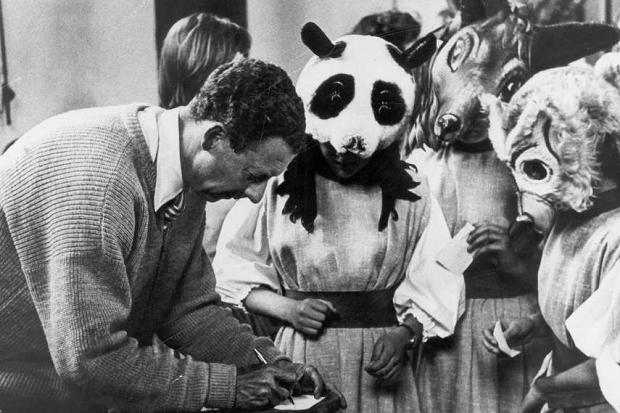 First published in The Herald on 12 November, 2013

It’s been a long year under the spotlight for Benjamin Britten, whose centenary celebrations reach their zenith next weekend around the big day itself (22 November). Since the beginning of 2013 there have been special performances of Britten’s music great and small, famous and obscure, from Peter Grimes on the beach at Aldeburgh to Billy Bud in Rio de Janeiro to multiple accounts of the War Requiem for Remembrance Day. The personal life of the man routinely described as the greatest English composer since Henry Purcell has been dissected and re-dissected in various new biographies and countless column inches. How many 20th century composers could survive such an onslaught of attention and come out standing? Very few as robustly as Britten.

One reason of the composer’s perennial (and universal, judging by the global span of centenary concerts) appeal is his ability to write music that is unmistakably him, regardless of context, forces or function. The strapline of the official centenary programme is “Britten 100: Music for Everyone”: the composer could be an esoteric chap when he wanted, and much of his music is underpinned with as rigorous a technical language as any ‘serious’ 20th century music, but he also believed that new music should include ordinary folk and young people as much as (probably even more than) urban aesthetes. When he founded the Aldeburgh Festival in 1948 he had that ideal at heart. Much of his greatest music was premiered not in the grand concert halls of London or New York, but in the local town hall in Aldeburgh or the little church up the road at Orford, with some of the world’s greatest musicians gathered there around him.

One such occasion was 18 June, 1958, when Charles Mackerras conducted the premiere of Britten’s latest opera, Noye’s Fludde. On the cast list were a merry gaggle of children, amateurs and professional, all equally sharing the bill. It was a fully-fledged opera, no question, based on a 15th century Chester mystery play with a medieval text and genuine operatic forms. But through a deft balancing of technical demands, from fiddles playing plain open strings to artful vocal lines for professional soloists, Britten managed to make every person in the room feel integral to the music.

Conductor Martyn Brabbins, who conducts Noye’s Fludde on Sunday with the BBC Scottish Symphony Orchestra and forces from the Royal Conservatoire of Scotland’s Junior Conservatoire, says that works like Noye’s Fludde did nothing less than kick-start today’s culture of music outreach and education. “It’s a masterpiece,â€ he says. â€œLike the finest operas, it’s an everyman story that turns into something epic and moving. Britten was very conscious of the role of music in society. He wrote music that could be genuinely useful to those who performed it and heard it.”

Above all else, says Brabbins, Britten was practical. “He understood everyone else’s limitations. He was able to write his own music that was distinctive – Britten always sounds like Britten – but he always wrote idiomatically for instruments, which isn’t as easy as it sounds. Open strings can be deadly boring in the hands of other composers, but Britten was is able to sculpt his musical language to fit the ability of any player.” Take the passacaglia, a baroque form in which all kinds of material unfurls over a repeating bassline. It was one of Britten’s favourite forms: it’s there in finale of the Violin Concerto, it’s there in Peter Grimes, it’s there in the storm scene of Noye’s Fludde. The beauty is that it offers a solid framework to support flexibility within â€“ and that suited Britten to a tee.

Other early-mid 20th century composers also championed music education, of course. Carl Orff developed his Orff Approach in the 1920s; the Suzuki method came into its own in the late 1940s; Zoltan Kodaly unveiled his teaching manuals in the late 1950s. Holst wrote reams of music for choristers, Lutoslawski wrote music for the Polish eductation board, Prokofiev immortalised the instruments of the orchestra in Peter and the Wolf. In fact, great composers have been writing music for children for as long as great composers have been writing music: think of Schumann’s Album for the Young or the easy piano sonatas by Beethoven and Mozart or Bach’s progressive two and three-part inventions.

But what’s so different about Noye’s Fludde is that it’s designed for children, amateurs and professionals to play alongside each other. Peter and the Wolf demonstrates the sounds of the instruments as played by professionals – it’s no mean feat for a clarinettist to zip around like Peter’s cat scurrying up that tree. Bach’s easy keyboard works were designed as teaching tools for studious pupils to improve their technique.

But in Noye’s Fludde there’s a sense of genuine equality between performers, no matter their age or technical stage. On Sunday, Siobhan Redmond will speak the Voice of God and a pair of young professional singers (Leigh Melrose and Jennifer Johnston) take the roles of Noah and his wife. But the solo parts for children and the ripieno – a kind of backing band – of amateurs playing things like recorders, sandpaper and ‘slung mugs’ (mugs on a string) are just as important. Even the audience gets to join in with three ‘congregational’ hymns: Brabbins plans to start the concert with a short rehearsal to put the the City Halls crowd through their paces.

Brabbins has conducted the the piece several times before, including with his own children’s school at the Cheltenham Festival. He describes the experience of bringing such a diverse bunch of performers together on stage as “extremely powerful. Music education is something I believe in profoundly. I came from amateur music background myself as a euphonium player in a brass band. Sure, it’s an honour to conduct at the Bayerische Staatsoper, but I also love conducting in my kids’ school gym.”

City Halls might not quite be a school gym, and in fact the BBCSSO is breaking tradition by performing Noye’s Fludde in a formal concert hall rather than a church or town hall as Britten specified. And while the opera is usually an excuse for all manner of face paints, masks, flags, and animal costumes, Sunday’s performance is primarily designed for a radio recording so won’t go all-out on the lion and giraffe gear. But Brabbins says that whenever he conducts he thinks first and foremost of the live audience. “This piece works brilliantly on a purely musical level,” he says, “but I couldn’t help but insist on a bare minimum of masks and face paints.” So consider yourself warned. If you do manage to get hold one of the free tickets for Sunday’s performance (already in short demand at the time of writing), animal get-up is most definitely welcome.

Noye’s Fludde is at City Halls, Glasgow, on Sunday. Tickets are free but limited.