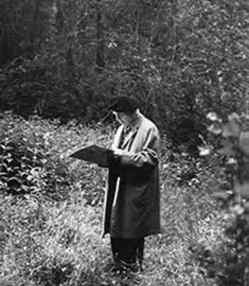 ‘A Messiaen premiere’: not the sort of statement you see on many new CD covers these days. For any performer or music historian, the prospect of unearthing a forgotten work by a great composer is tantalising enough. But when that work turns out to be a significant stepping-stone – the missing link that explains the composer’s subsequent creative evolution?

In 2012, the pianist and biographer Peter Hill happened upon a loose bundle of pages among Olivier Messiaen’s sketchbooks and soon realised he’d found a draft of an unpublished piece. The excitement didn’t stop there. The more Hill studied the scribbled pages and set them in context of when and where they were composed, the more he became convinced that this little piece was in fact the beginning of a whole new piano cycle – a sequel, perhaps, to Messiaen’s monumental Catalogue d’oiseaux.

Two years later, recounting the story over a cup of coffee on a cold, crisp afternoon in London, Hill’s evident thrill about the whole business is easy to share. We meet around the corner from the music division of Faber, who are set to publish the score of La Fauvette Passerinette (The Subalpine Warbler) in the spring. Hill’s debut recording of the 11-minute piece was recently released on the Scottish label Delphian, set among other 20th century piano works by Ravel, Stockhausen, George Benjamin, Tristan Murail and Messiaen himself. The release has already caused giddy ripples through the industry.

So how did it all come about? Hill was the first pianist to record Messiaen’s complete piano music, a project on which he worked closely with the composer between 1986 and 1991. Messiaen died in 1992; ten years later, Hill went back to Paris to visit his widow, Yvonne Loriod, in the couple’s apartment on Rue Marcadet in 18th arrondissement. “She was a marvellous person,” Hill recalls. “Rather like a bird herself in the way she fluttered around so gracefully.” Hill had gone with “a nebulous idea” to do something biographical on Messiaen – perhaps a modest photo book with light commentary. He ended up writing an acclaimed biography, published in 2005.

During the visit, Loriod asked Hill whether he would like to see her husband’s archive. “She led me down a long corridor and there much jangling of keys, then she threw open a door and said, ‘here is what I’ve spent the last decade organising.’ It was small room lined from floor to ceiling with shelves and neat box files. I was stunned. She paused… then she said the thing I would never have dared to ask. ‘When you’re next in Paris,’ she said, ‘why don’t you come along and do some research here?’”

Hill took up the offer and subsequently began the long job of looking through Messiaen’s birdsong notebooks. The composer was a passionate ornithologist and transcribed birdsong throughout his life, beginning with primitive approximations of ‘tweet tweet’ and eventually becoming astoundingly exact. His music incorporates birdsong in multiple ways, from the literal to the suggestive to the spiritual. “When I first looked at the notebooks I assumed they would just be dry transcriptions,” says Hill. “I’m no ornithologist myself and I thought I’d be lost. But I became fascinated. There are 203 notebooks with at least 10,000 pages altogether. They start in 1952 and finish the summer of 1991. They give an unparalleled insight into a musician’s mind.”

The books are full of memos and sketches and fragmented ideas for future pieces scribbled in margins. Messaien often had his best ideas when he was out and about, walking among the birds, and he couldn’t bear to waste manuscript. Hill guesses that’s why La Fauvette Passerinette ended up where it did. Those 12 loose pages in the back of one of the notebooks were the manuscript paper that happened to be lying around when Messiaen wanted to compose the piece in 1961.

The first and last sections were complete – there were even pedal and fingering markings. (Messiaen was always meticulous: the use of a particular finger could change the weighting of a chord, which could in turn change its special colour.) Hill’s major challenge came in the middle section, just fragments connected by a baffling alphabetical scheme. “But because Messiaen left such a trail of clues as to where each snippet of birdsong came from, I was able to go back through the notebooks and discover what should go where. I was able to project the relevant rhythms and gestures onto what he had written.” This point is important, he stresses. “It means that everything in the piece is by Messiaen, though it involved a certain amount of detective work.”

Hill believes that La Fauvette Passerinette represents a new development in the way that Messiaen incorporated birdsong into his music. It is more abstract, more refined than his writing in the Catalogue d’Oiseaux (composed 1956-58) because it uses only elements found in the birdsong to create its entire harmonic scheme. The same technique later appeared in Messiaen’s vast opera Saint François d’Assise (1975-83). He wrote nothing else in 1961 – a low productivity that was highly unusual. Hill is sure this is significant: that he was busy planning something big. “This period was the absolute zenith of Messiaen’s powers,” Hill says. “He was a man in his 50s; he had become fantastically good at birdsong notation and extraordinarily creative at using it. He told me in person he wanted to write another Catalogue.”

Why, then, would a composer as fastidious as Messiaen allow a piece of such importance – the beginning of a new technical language, perhaps the start of a whole new piano cycle – to lay unfinished and unpublished? Hill’s theory is timing. By the end of 1961 the composer was getting major orchestral commissions that superseded his piano project. The new cycle simply never happened.

There might well be more undiscovered Messiaen. At the back of Technique de mon langage musical, a teaching manual published in 1944, a list of musical examples includes works that have never been found – a 1935 mass for women’s voices and eight solo violins, for example. Hill suggests that a great deal more delving needs to be done in the apartment on the Rue Marcadet, and in the vaults of Messiaen’s bank. “From the late 1940s, when his first wife started getting serious dementia, Messiaen was terrified that something might happen to his manuscripts and deposited them in the bank for safe keeping,” Hill explains. “You know what it’s like getting into someone else’s bank: jolly difficult. But it is very, very tantalising…”

La Fauvette Passerinette is out now on Delphian