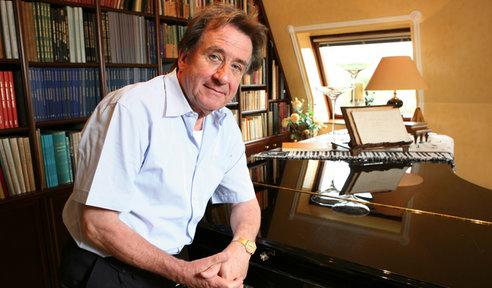 First published in the Guardian on 6 August, 2015

“Beethoven was the most romantic of composers,” says Rudolf Buchbinder, thrusting a score at me to demonstrate exactly how and why. “Just look: nobody else wrote ‘a tempo’ after ‘espressivo’. When Beethoven wrote ‘espressivo’ — which he did a lot — he meant something deeply emotional, something extreme, something that would stop time as we know it.” This might sound like the minutia of technical lexicon, but for the 68-year-old Austrian pianist it is much more than that. He plays me a few bars of Beethoven’s Sonata in E, Opus 109, pulling the pulse and dynamics around like a badly warped record.“You hear? That is romantic freedom.”

When Buchbinder performs Beethoven’s 32 piano sonatas in Edinburgh this month, it will be his 49th account of the complete cycle (his 50th is in Vienna in the autumn). He has recorded the set three times, with the latest coming out soon on DVD. These pieces have been the backbone of his 50-year career — yet he is still moved to tears every time he plays them. “OK, I cry very easily,” he clarifies with a wave of the hand, “but yes, in every sonata there is some part where the tears come. I am never finished with this music. I learn every time. It is a challenge every time.”

We are talking at his home in Vienna: a labyrinthian 1970s structure that he designed himself among the hills and vineyards on the outskirts of town. A toy poodle called Freddie accosts me at the door before I’m led through room upon room of piano-themed trinkets and classic movie posters in which Buchbinder’s face has been superimposed next to James Dean and Marilyn Monroe. He shows me watercolours he has painted — brightly coloured landscapes with bold, swirly clouds — and an upright piano turned whisky bar that contains 60 bottles of fancy malt though he only ever drinks J&B.

At the top of the house is the music room. Two Steinway grands share the space with a snooker table and sofas upholstered with piano-print fabric. This is also where Buchbinder keeps his extensive collection of manuscripts: first editions and autographs, Urtext publications and countless revisions. “Only since I started collecting old sources have I realised that knowledge is what make me most free,” he says, flicking through a treatise by the Viennese theorist Carl Czerny. “Here, read this.” He holds out a page of thick 19th century German. “No? Czerny writes that when Beethoven played the slow movement of Opus 90, he changed the tempo all the time. The musical freedom back then was fantastisch! We are too strict today.”

There’s a clue here as to Buchbinder’s particular — some would say peculiar — take on matters surrounding period performance and musical authenticity. He once owned a collection of historical instruments that included Mozart’s own piano, but today the snooker table takes up that space and he only performs on modern instruments. He is fastidious about accurate editions, tempo markings, articulation styles, yet for some listeners his interpretations are too erratic and explosive for comfort.

Where does he draw the line? “Ah,” he says. “Beethoven was unhappy his whole life about the pianos he played but he still wrote horribly difficult things. Can you imagine what he would have written on a piano like this?” He pats his Steinway and reaches for another manuscript. “See here, how Beethoven writes ‘contra e’ in his Opus 101 sonata. It’s a note so low that it didn’t even exist yet in Vienna, but he had heard that in London there was a piano with that low E. He wrote it in for the future. Of course he would have wanted us to play modern pianos to their full extremes.”

The door opens and Buchbinder’s wife comes in with a huge plate of Viennese cream cakes — Kardinalschnitte — made especially for my visit. The couple have been married for nearly five decades. They met at music college where she was also a pianist, though she hasn’t touched an instrument since. “She thinks one pianist in the house is more than enough,” Buchbinder whispers once she has left the room. “But look how she cooks! In Vienna people say that I play the piano almost as well as she cooks.”

Buchbinder was born in the Czech Republic but is Viennese through-and-through. He trained here; he has made the city’s music the core of his repertoire. He grew up in a small apartment, two rooms for four people. “Don’t ask me why, but there was a piano. On top of it was a radio. Both were like a magnet for me. As a little boy I always tried to play what I heard on the radio.” He passed the junior entrance exam for Vienna’s music academy aged five; at 11, he was accepted into the class of Bruno Seidlhofer alongside Nelson Freire and Martha Argerich. “And do you know I never had a single lesson alone? We were at least ten students together, and it took all day. We all listened to each other. There was never any jealousy.” By 13, he was frequenting Vienna’s piano bars, improvising popular songs into the night with a cigarette lodged between his fingers. He still listens to Frank Sinatra in his car, and though he quit smoking years ago he jokes that at least the habit gave him good finger control.

There’s a nostalgia to the way Buchbinder talks of the Vienna of his youth, and he openly laments the loss of an older cosmopolitanism that he says underpins all great Viennese music. What does it mean to be an artist here today? He cuts another piece of Kardinalschnitte before telling me a story about his first ever Beethoven cycle, when one night he had to take a detour on the way to the Konzerthaus. At a red light he looked up and saw a little plaque: ‘in this building Beethoven composed the Hammerklavier sonata’. “I played it that same evening. It’s a kind of atmosphere I can’t explain, and maybe I shouldn’t try. But there is no question that this music is in my blood.”