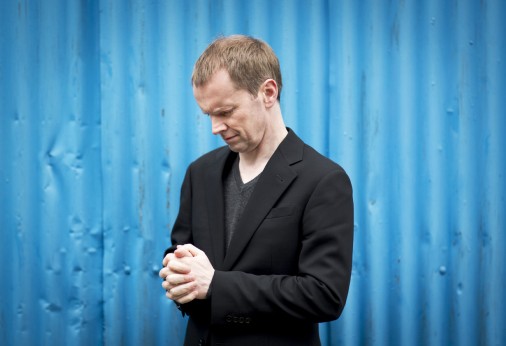 First published in The Herald on 26 February, 2014

Concert pianists are an astounding bunch. They’re like extreme athletes: all those years of solitary training, the ferocious competition, the physical stamina needed to survive a Rachmaninov concerto, the mental capacity to remember volumes upon volumes of music, the psychological fortitude to cope with sitting utterly alone on stage.

To describe Steven Osborne as singular would be to suggest that there’s a norm among concert pianists, which there isn’t: there are many ways of dealing with those pressures as there are pianists in the business. But Osborne has always seemed remarkably, well, grounded. In an industry crowded with glossy marketing, his image has remained resolutely neutral. Publicity shots show a soft-featured, smiling man in his forties who could be a gardener or a chef or a history teacher. His stage manner is plain and calm. His playing is profound, lucid, sensitive, kaleidoscopic, but his demeanour gives nothing away.

We’ve arranged to meet in a cafÃ© in central Edinburgh. Osborne walks in carrying a bicycle helmet and a waterproof jacket having cycled up through the rain from his New Town flat. In person he’s as down-to-earth as his stage manner. â€œConcert tours aren’t quite real life,â€ he tells me. â€œAll that weird adrenaline. The rhythm of anticipation then coming down afterwards â€“ it’s not normal to do that day after day.â€

He enjoys performing, he says, and rarely feels disappointed after a concert. â€œSure, something always goes wrong, but it’s never a really big deal.â€ Does he ever get nervous? â€œNerves are a strange thing. It’s an incredibly important area for musicians, but nobody talked about it when I was at music college. They’d say you play better when you’re nervous, which is total nonsense. That’s just a way that teachers who can’t deal with nerves themselves try to rationalise it.â€

The key for him is perspective. â€œIt doesn’t matter how many mistakes you make; the worst thing that’s going to happen is that the audience will be a bit disappointed and you’ll feel a bit humiliated. What’s important for me is something that sports psychologists talk about: incorporating your adrenaline, accepting the frailty as well as the strength. I’ve been working on it for many years. It’s not easy.â€

Two decades have passed since Osborne made his professional debut, but only in the past few years has his reputation earned the really widespread acclaim that it deserves. Last year he won both Gramophone’s Instrumental Award and the Royal Philharmonic Society (RPS) Instrumentalist of the Year; currently he’s working his way through Beethoven’s piano concertos with the BBC Scottish Symphony Orchestra live on BBC Radio 3 â€“ the next instalment is tomorrow.

Has he found his nerves retreating as his reputation solidifies? â€œActually it can work the other way,â€ he says. â€œI gave a concert at the Wigmore Hall just after I won those awards and felt a new kind of pressure. People who are really at the top of the profession â€“ the Brendels, the Argeriches â€“ I can’t imagine what it’s like to have audiences coming to your concerts and expecting something transcendental each time. It must be terrible.â€

I had assumed, wrongly, that industry awards wouldn’t matter much for someone as demure as Osborne. â€œActually it was lovely,â€ he says. â€œParticularly for my dad. My dad was always my greatest fan. He heard about the RPS award just before he died and was so happy. He was always extremely proud. The best complement any other pianist could get from him was the he played as well as me.â€

Osborne grew up in Linlithgow and studied at St Mary’s Music School, Edinburgh, then the Royal Northern College of Music. He describes his younger self as ‘completely naÃ¯ve': â€œI didn’t have any thoughts about career. I just loved playing piano.â€

â€œLuckily my teacher in Manchester, Renna Kelloway, was very canny and always looked out for the right kind of opportunities for me. When I did my Edinburgh Festival debut she called up a few agents â€“ I’m still with the same one now. I don’t know what would have happened if she hadn’t recognised that certain practical things needed to be put in place.â€

I ask whether he consciously chose his repertoire direction, whether he felt any pressure to become a ‘Ravel guy’ or a ‘Messiaen guy’. â€œAt one point I realised I was getting known for doing a lot of modern stuff, and then I consciously didn’t do modern stuff for a while. I didn’t want to get put in a narrow box. So I turned to Beethoven, Rachmaninov, Ravel. I like contrasts. Even with pianos I need a lot of contrasts: I almost never find a piano that’s loud enough for me. I want a piano that can be louder than a full symphony orchestra and that can play unbelievably quietly. It’s almost a juvenile instinct â€“ like a kid hitting a drum as hard as I can.â€

Which is surprising, because I’ve never thought of Osborne as a pianist who plays too loudly. â€œIt’s about feeling as well as volume,â€ he explains. â€œThat you can express something as vividly and strongly as you can. In big Rachmaninov climaxes it’s about getting that overwhelming symphonic quality. I don’t have Russian steel fingers that can break pianos â€“ so when Rachmaninov gets really complex and really loud, I have to play at the limit of my abilities. Maybe I just want a piano that’s powerful enough to give me a bit of leeway. I don’t want there to be any limit at all. Maybe it’s about dissolving into the music, and not wanting to be reminded that there is any limit.â€

He laughs when I tell him that he seems grounded for a concert pianist. â€œWell I’m always striving for it. It’s a complicated thing. There’s an inherent contradiction in playing classical music. You’re on stage, everyone is clapping for you, and yet all you’re doing is sharing something very human and universal. So the challenge of not getting taken over by the first and keeping a sense of the second. Even stupid little things: you can always go through the doors that other people can’t. That can worm its way into your psyche. But I’ve always had a sense that you shouldn’t get too big for your boots â€“ maybe it’s a Scottish Protestant thing. I feel like if you buy into that idea of being special, you just start looking for applause. Decisions stop being musical decisions, and you destroy what you’re actually trying to do.â€