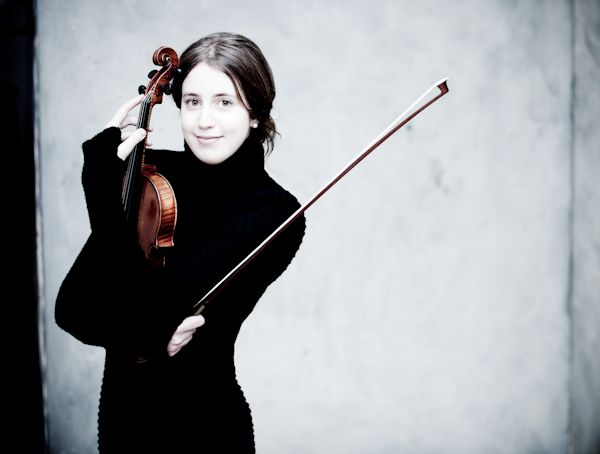 Vilde Frang tends to attract adjectives like feisty, quirky, organic, irreverent. “There is nothing polished or calculated about her playing,” wrote one German critic; “Vilde Frang is only herself,” wrote another. In an industry that churns out palatably photogenic young female violinists at a rate of knots, this 27-year-old Norwegian has managed to retain an image that is less manufactured and more interesting than most. Her publicity photos are modest, almost folksy, and in interviews she is open and unassuming. More to the point, her full-blooded playing is never for show. Her interpretive choices will throw up plenty of surprises, and probably some uncomfortable challenges, but they’ll always be her own.

Frang is the greatest classical talent to come out of Norway since Leif Ove Andsnes. She grew up in Oslo in a family of double bassists and as a child assumed that she too would take up the instrument until her father pointed out that there was no more room in the family car. So violin it was: Suzuki method at four, public debut at ten, soloist with Mariss Jansons and the Oslo Philharmonic at 13, duet tours with the German violinist Anne-Sophie Mutter in her teens. Now Frang’s schedule is a cherry-pick of solos dates with Europe’s classiest orchestras and chamber music with a who’s who of international musicians — the likes of Martha Argerich, Renaud Capucon and Leif Ove Andsnes. Next week she plays Britten’s Violin Concerto with Thomas Sondergard the Royal Scottish National Orchestra; when we speak she’s in London to give a solo recital at the Wigmore Hall and record Mozart concertos with the period instrument ensemble Arcangelo.

She seems unfazed by it all, but also gracious. “Smooth and easy my career has definitely not been. Sure, there has an element of being in the right place at the right time, but I have also worked very hard.” She takes care to qualify her assertion that music and career are polar opposites, acknowledging that industry success is handy when it comes to opening certain doors. “Career is important in as far as it is a tool for getting to do what I want musically,” she says. “Directing chamber orchestras, playing concertos with great conductors, that kind of thing. But it’s not a means to an end. I’ve had to swallow some pills that didn’t taste very good to achieve the space to do what I want.”

By unsavoury pills she means marketing: the kind of glossy full-body shots that record labels consider important in promoting young artists, particularly young female artists. With her long nut-brown hair and icy Nordic gaze, Frang could easily pull off the classical diva look if she wanted to. But flipping through the obligatory gallery section of her website you’ll find minimal make-up, outdoorsy backdrops and photos in which her violin (a 1709 Stradivari, no less) is usually the star. I ask how she keeps it all so natural. “There are always suggestions from the record companies,” she says, “but I’m very stubborn. I consider it a responsibility over myself.”

The same goes for the music. When she made her career-break debut with Jansons back in 1999, it was with the Carmen Fantasia by Sarasate: not a standard concerto by Mozart, Mendelssohn or Tchaikovsky. She says she’s grateful to Jansons for letting her make that choice. “I’ve always been very aware of what I want to do and why I want to do it, and I’ve been quite privileged that the people who have mattered have let me decide my own path. Usually there is pressure to only record music that will sell, but I’ve always felt that if you’re really convinced about something then it is bound to work.” She points to the example of her second album, which includes violin sonatas by Bartok, Grieg and Richard Strauss. “Not exactly what you’d put under the Christmas tree,” she laughs. “But I believe that as long as I keep my identity, as long as my DNA is in the music, well that’s what everything is built on. It has to come from inside. It’s an instinct. It’s something so obvious, something you can’t resist.”

I ask Frang about Norway: whether a sense of home and homeland is important to her, whether she thinks she’ll ever move back (she is currently based in Berlin). “I do visit Norway for holidays,” she says, “and I find it cosy, safe and clean. It’s difficult to breath and be creative there. There’s no challenge. The mentality is that you shouldn’t have to work hard or exhaust yourself. I was labelled a kind of wunderkind and to be honest it’s a bit stifling.” She says that Berlin is the perfect place to live “if you don’t know where to live,” and jokes that the city’s wealth of other talented musicians keep her on her toes. “I need some challenges, some struggle. Otherwise where would I find my expression?”

Benjamin Britten composed his only violin concerto in 1938-9 during a exile of sorts in North America: he had left England as a pacifist and would return in 1942 as a conscientious objector. It’s a troubled score, full of longing and nervy tension. Britten had been at the premiere of Alban Berg’s violin concerto in Barcelona in 1936, just before the outbreak of the Spanish Civil War, and Spanish character underpin his own concerto. The opening scales rise and fall restlessly over Spanish rhythms, and the work closes with a haunting Passacaglia. Vilde Frang describes the concerto as “immense”, “deep” and one of her favourite works. “The percussion opening is so militaristic, so much of a premonition for what was to come in the Second World War. And there’s a constant struggle in the violin part — “near the end, the orchestra urges the violin to come to their side, where they are lingering in a kind of paradise. It’s something extremely difficult to resist but the violinist has to remain alone. It feels like I’m fighting against death. Actually I’ve never felt closer to death than when I am playing this piece.”