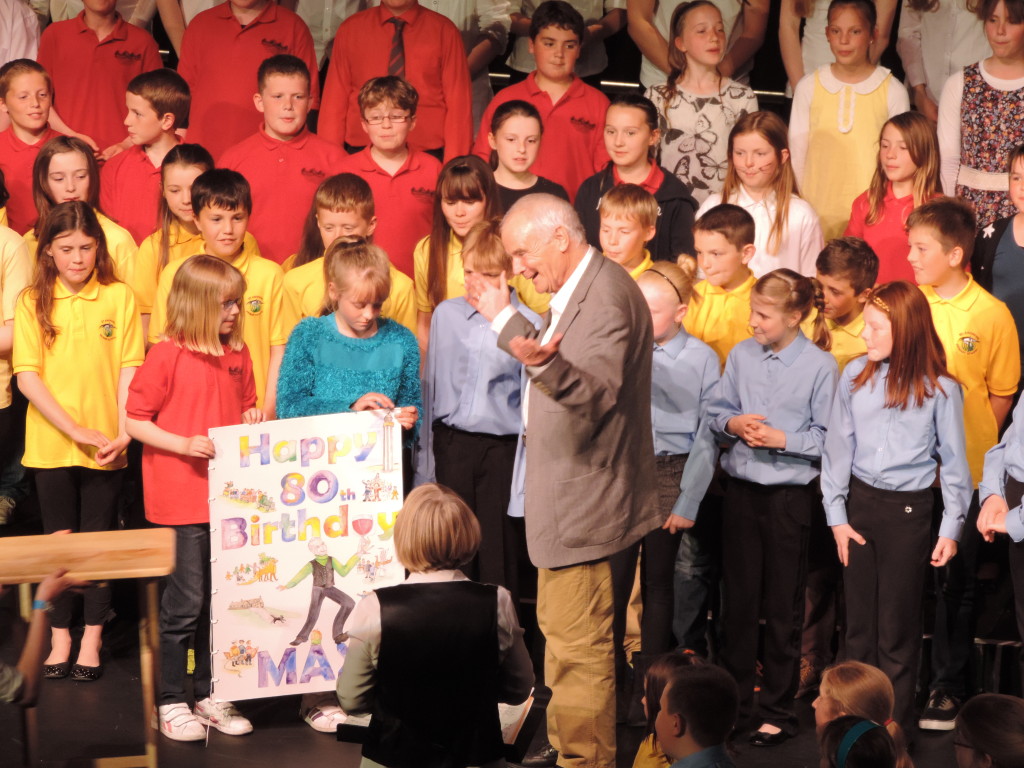 First published in the Guardian on 8 July, 2014

There was something hugely touching about the birthday party that the St Magnus Festival threw for Sir Peter Maxwell Davies last week. Max – as he’s universally known in Orkney and throughout the musical world – turns 80 this September, and the occasion will be marked by special concerts in Glasgow, at the Proms and elsewhere. But up in Orkney, at the festival he helped set up on the islands he has called home since the 1970s, the official celebrations didn’t involve any high-profile artists or high-budget commissions. In a packed auditorium at Kirkwall Grammar School, it was local young musicians who gathered to perform a collection of the composer’s works for children.

Max has been writing educational music for more than half a century. Even during his most caustic early period, alongside screamingly radical works like Eight Songs for a Mad King and St Thomas Wake, he was penning these semi-sweet, sort-of singsong tunes for the use of nearby primary schools. I say ‘sort-of’ singsong, because with Max there is always a twist. What first sounds like a simple nursery rhyme turns out to be laced with weirdly roaming intervals; what starts out a steady 4/4 ostinato soon begins to hiccup with tricksy cross-rhythms.

This isn’t simply a case of a clever composer keeping himself entertained. There is real pedagogical intent behind works like Kirkwall Shopping Songs, Seven Songs Home or the thrillingly-named Dinosaur at Large; even the simplest lines keeps their young performers on their toes. Speaking before the Kirkwall concert last week, Max described children as his “most appreciative and harshest critics”. With a mischievous smile and wag of his finger, he explained that “you can’t get away with anything phoney; when you write for children, you have to write up. It has to sound good in their terms. You almost have to think as if you are their age.”

During the early days of the St Magnus Festival, Max wrote pieces for the schools of Orkney every single year. Back then he was living in a remote croft on the craggy west coast of Hoy: the tiny Bunertoon, perched high above the sea cliffs at Rackwick Bay, accessible only by foot and frequently battered by storms blasting across the Pentland Firth. To survive in a place like that required the support of his neighbours, and underpinning Max’s music for children is a desire to be useful, to square up what it means to be a composer-member of a small island community.

Involving the schools was also, the composer acknowledged last week, an important gesture as an incomer to the islands. When he co-founded the St Magnus Festival in 1977, Max was perfectly aware that some locals might mutter a word or several about an elite classical music series crash-landing on their doorsteps. “I thought it was a constructive idea to write words and music about the place where the festival was happening,” he said. “And the best way to get people to come to the festival was to involve their children.”

And so many of his songs are packed with images of Orcadian life. Here’s a verse from Songs of Hoy: Rackwick Valley/ Is no place to dally/ When rains lash down from the sky./ In two minutes flat/ Your clothes stick to your back,/ And there’s nowhere to get dry. In Kirkwall Shopping Songs there’s a spooky instrumental interlude, The Big Tree, in which sparse recorder and drum lines depict a town landmark. At the Bakery is a spoken-word number that features a boy soloist earnestly intoning a shopping list – two bridies at 12p each, a cream cookie at 10p, and a block of chocolate for 28 – against a smattering of percussion that mimics the sound of change being sorted on the shop counter.

There was a sombre note, too. Before the concert Max spoke about the future of state-funded music education, describing his feelings as ‘despairing’. â€œWe’re seeing the demise of school orchestras, and school choirs barely exist. When I wrote these pieces, I took it for granted that they’d still be part of the culture. But successive governments have cut and cut and cut.â€ Asked what can be done, he replied: “apart from the fuss I’ve made about it all my life, I don’t know what to do. I will continue to write educational music of the highest quality I can. And despite being Master of Queen’s Music, I will continue to rail against the establishment.” The remark was met with an enormous cheer.

The concert itself was a fond affair, full of appreciation for what Max and the festival have contributed to these islands over the past four decades. The composer watched on with a broad smile. He hasn’t been well for the past couple of years – this is the first time he has attended the St Magnus Festival since he was diagnosed with leukaemia and underwent chemotherapy. But at the end of the concert he trotted on stage to receive a cake and a round of Happy Birthday. I got the sense there was nowhere he would rather be.