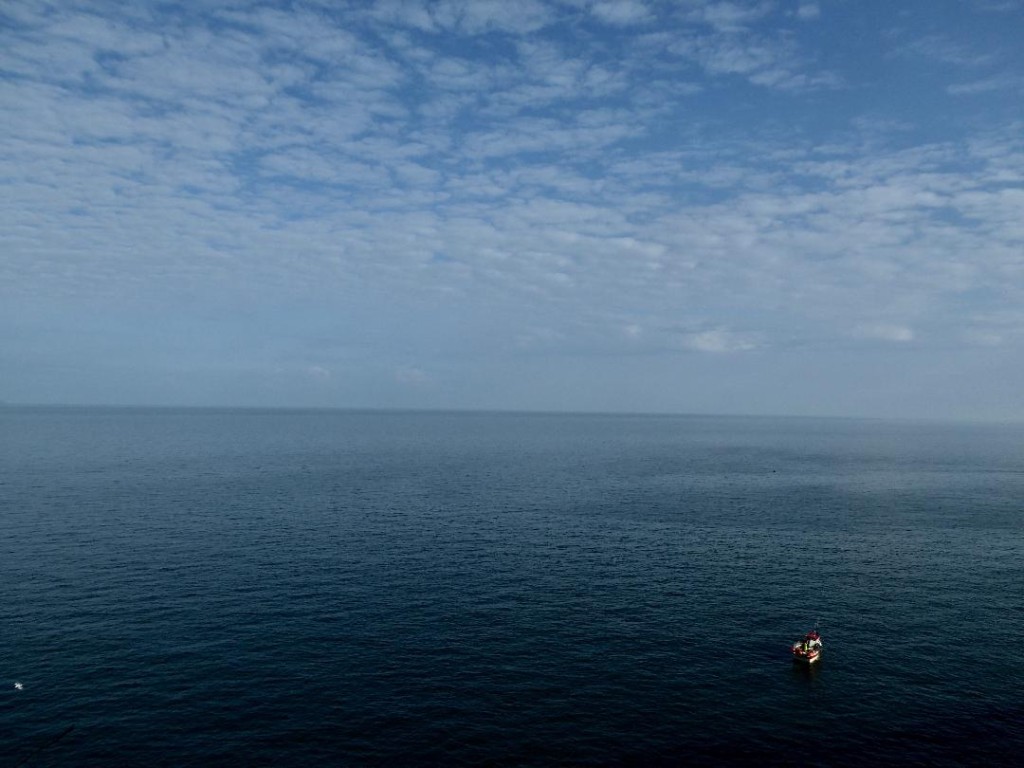 The songs tended to be Brethren hymns, sung by fishermen at sea who could not get to church for Sunday worship. They would not only sing for themselves: they would sing to each other across the North Sea via the ship’s radio channels. Any boat within 200 miles could pick up the signal. Back on shore, where most families had wireless receivers since the war, the fishermen’s families could tune in, too.

Hughes remembers the singing as a spontaneous occurrence, nothing organised or formal. Just a minute or two of impromptu music throughout an otherwise quiet day. “The skipper would shout down to the crew if a particularly good singer took to the airwaves,” he smiles. “He’d tell us to come have a listen to this voice or that voice. Some of the men were fantastic singers who would build up quite a reputation. I remember the hymns being very tuneful. I think they tended to avoid the dirges! It was a lovely thing, especially if it was miserable weather, to hear those tunes drifting across the water.”

Hughes remembers the singing going on into the 1980s, after which the Sunday work hiatus was scrapped and the noise of seven-day industry took over. And because there was nothing official about those impromptu hymns sung on the water, the voices now exist in memory rather than in any formal histories.

Hughes is campaigning for a memorial to be constructed to honour Fife men lost at sea. His aim is to commission a piece by the sculptor Alan Herriot to stand on the foreshore at Pittenweem. “We would like a sculpture of a young woman with a child holding onto a fishing basket,” he says. “They’re waiting on the child’s father coming back. People have asked why we don’t want a sculpture of a fisherman himself… it’s because these were the people who were left behind. In the 1890s, guys from Fife were lost on a monthly basis. I remember one old lad saying to me that it was just a way of life.”

While the Pittenweem Fishermen’s Memorial Association gathers funds to build the physical memorial, this year’s East Neuk Festival has commissioned a memorial in sound. The project caught the imagination of Robin Rimbaud — acclaimed sound artist, soundtrack composer and general electronic music pioneer otherwise known as Scanner. He first came to international attention in the 1990s for his guerrilla sonic arts tactics: decades before Cambridge Analytica, he would scan mobile phone conversations and incorporate vocal samples into his electronic music. It made for a kind of rhythmic realism, a sonic voyeurism which had him misleadingly labelled a ‘data pilferer’, a ‘flaneur electronique’, a ‘telephone terrorist’. But the perceived invasion of privacy was way off the mark — the voices were scrambled beyond recognition. The point was this: a prescient comment on how isolated we might become in the age of virtual communication.

Much of Rimbaud’s work around the globe has to do with connection and loneliness, with memory and the suggestive power of sound, with how electronic music can summon and honour the forgotten. His pieces are in the permanent collections of museums including the Darwin Centre at the Natural History Museum. Little wonder he’s so taken with the idea of recreating the spirit of hymns drifting across the North Sea.

“I imagined a lonely guy singing in the cabin,” Rimbaud tells me. “I imagined the boat alone under misty skies, late at night, and these voice coming across a crackly radio. Just the idea of it is utterly magic. It reminded me of being a teenager, when my bedroom radio would often pick up the truckers’ CB radio.” Citizen band radio: a system of short-distance radio shared by a community of users, particularly by truckers.

For the sound memorial at East Neuk Festival, Rimbaud has been working with pupils of Waid Academy in Anstruther. The sound installation will be housed at the Scottish Fisheries Museum, part of an exhibit in the wheel house of an old fishing boat. But the first performance will take place at Waid Academy itself. The audience will enter the school assembly hall and be confronted by a tiny boat in the centre of the huge space. The image of the boat will be projected onto the wall, and then the sound will begin, the voices of children listing names of the men who died at sea. “All in a different order,” Rimbaud describes, “all collaged together. I’ve also asked some of the kids to play instruments. There is a very good horn player, for example, and she’ll be playing long sustained notes. And then we’ll hear a hymn. I hope the whole thing will be sweet and touching, like a memorial, but not in a melancholic way.”

“Electronic music has that ability,” he adds. “There’s a certain school of electronic composition that draws on a sense of history or melancholy. I guess I’m part of that. I use electronic means to create something with an emotional base. To tell stories, to move people. Because electronics have an otherworldly quality. They can offer us sounds that we can’t hear any other way. There’s a mystery, but also a tangible quality in the way a sample or a suggestive sound can draw you back to a music you heard when you were growing up. A TV show from the 60s or 70s. A soundbite that is eerie and unforgettable. These fishermen’s songs exist in the memories of men who went out on the boats. Now they exist in the imagination of the school kids in Anstruther, and that transfer of shared history has been a beautiful thing to witness.”

East Neuk Festival is 27 June – 1 July at venues around the East Neuk of Fife. www.eastneukfestival.com/