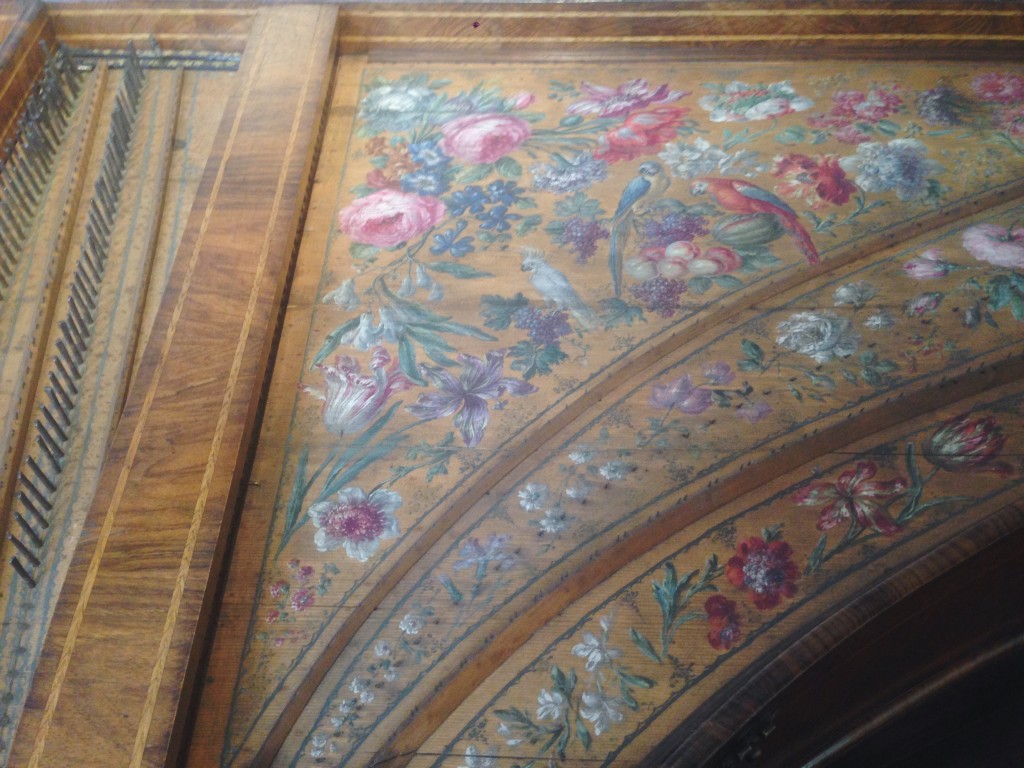 Here’s a heckelphone (an oversized oboe); here’s an alto fagotto (a tiny bassoon). Here’s a guitar from 1650s Venice made of a thousand small pieces of wood glued together like a parquet floor. Here’s a weird looking flat-bellied violin like the ones Henry VIII imported from Italy. Over here are instruments from Burma, from 14th century Iceland, from Mexico and Uganda, a Yamaha DX7 — think 1980s synth pop — and a wall of saxophones made by Mr Sax himself. Over there is a complete 1920s jazz band, the likes of which would have played upstairs when St Cecilia’s was a dance hall.

I’m in the new gallery space at St Cecilia’s, which opens to the public tomorrow after a £6.5 million redevelopment that brings Edinburgh University’s collection of historic instruments under one roof for the first time. There is a unique joy in wandering around an instrument museum like this. The weird and wonderful old marvels, the outlandish serpents, the ancient clarinets, the unidentifiable prototypes and precursors of instruments we nowadays take for granted. Downstairs the building houses two galleries: one arranged taxonomically, the other thematically into ritual, classical, popular and folk instruments. Upstairs are the keyboard instruments and the gem of a concert hall itself.

It has always seemed an anomaly, Scotland’s oldest and most elegant concert hall tucked in amongst the grimy pubs of the Cowgate. St Cecilia’s opened in 1763 at the behest of the Edinburgh Musical Society — the great and the good of Scotland’s capital, lawyers and doctors, who imported violinists from Italy to lead their amateur orchestra and wanted a fitting home for their music making and were willing and able to pay.

The room they commissioned from architect Robert Mylne was a petite oval beauty modelled after the opera house in Parma and topped with a broad, bright cupola. The acoustic was and still is bizarre for speaking, with an unnerving close echo effect, but for unamplified instruments it’s a gorgeous space. In the 18th century the capacity was 400, crammed into five tiers of steep seating around the curved walls like a dissection theatre. Now, after the refurbishment, there is room for just 200.

And while it wasn’t unusual for Edinburgh’s Old Town to build upward, every stratum of society jumbled on top of one another, what was odd was that the august gentleman of the Musical Society didn’t anticipate the changes that were to come only a couple of decades later when the New Town was built. Not only did the bridges ruin St Cecilia’s graceful facade, but the genteel population of Edinburgh decamped north to the spacious new Georgian streets and, after the Assembly Rooms opened, St Cecilia’s was made obsolete after only 30 years.

Over the centuries it went through various guises: a Baptist church, a freemason’s lodge, a storeroom, a bookbinders, a school, and — most spectacularly — the Excelsior Ballroom. “Every year at Doors Open Day I talk to women who tell me they met their husbands on the dance floor at the Excelsior,” says Darryl Martin, organologist and principal curator at St Cecilia’s. “Funny how I’ve never had a husband tell me he met his wife here…”

The building was bought by Edinburgh University in 1959, not so much to function as a concert hall but as a warehouse for the substantial collection of harpsichords that had just been donated by the family of the instrument obsessive Raymond Russell. (Russell had authored an important study on harpsichords, but once he finished the book he moved onto another passion, the fortifications of Malta. He drowned while researching in the Mediterranean; he would have been safer sticking with harpsichords.)

From that initial collection of 19 harpsichords donated by the Russell family, the university grew the keyboard collection to over 100 and the overall instrument count to nearly 500. For many years the museum was split between the Cowgate and the Reid Concert Hall in Bristo Square. Now the instruments can be viewed together to tell a more complete and coherent story.

How important an instrument museum is St Cecilia’s? It’s the oldest, for starters (founded in the 1840s as a teaching resource) and the university claims it is “not surpassed in breadth”. It has the best harpsichord collection in the world, the best clarinet collection, and the singularly most famous and most copied harpsichord — the pale green and gold Pascal Taskin from 1769.

Walking around the galleries in the company of Martin and one of his PhD students, the harpsichordist David Gerrard, is like visiting with some of their cantankerous old friends. Do the instruments like being played, I wonder? “We’ve never asked them!” What’s the ideal atmospheric condition for them? “Same as for people, really. If it’s too dry, it would be bad for you asthma.” Are they listed online? “Yep, they’re all on tinder and such.”

But it is hard not to be charmed by these beautiful rare breeds. Martin points out graceful little spinets, a meantone virginal from 1625, a 1766 double manual harpsichord by Shudi that Mozart probably played, a squat chamber organ from 1760 with an endearing break in its voice, a Ruckers harpsichord from 1638. “You’ve heard of Stradivari? Well, this is the harpsichord equivalent, and” — he runs his fingers over the keyboard — “this one is extra special. Look how the keys don’t line up with each other. Essentially it’s two harpsichords in one. Every other Ruckers double manual has been altered. This is the only one that survives. It is effectively priceless.”

For me, what’s so exciting about meeting these instruments is how they allow us to better understand the music that was written for them. So when I look at an early 18th century Hass clavichord like ones JS Bach would have had in his home, I can hear up-close how the mechanism works and realise that Bach’s slow melodies would have been played with vibrato. My tour is full of such wondrous little revelations.

And even without the personal guidance of Martin and Gerrard, the instruments will be audible via recordings and public events. The university intends to increase the number of concerts held at St Cecilia’s, many of which will feature the old instruments. This year’s Edinburgh International Festival features a special six-part series at the hall, and although that series is already sold-out, keep an eye on the Georgian Concert Society for events through the year. In the meantime, spend some time in the museum with the heckelphones and serpents and split-key virginals. They’ll soon start to feel like old friends. I’ve already been back to visit twice.