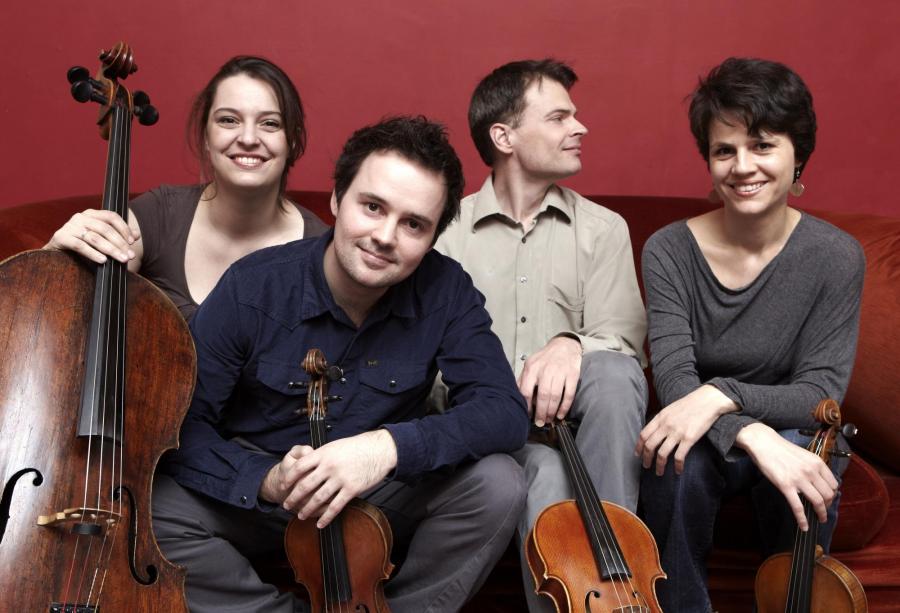 First published in The Herald on 27 September, 2013

The mad genius, the belligerent loner, the deaf visionary. Beethoven’s mythical persona tends to be lurid and larger than life, fuelled by generations of dodgy Hollywood biopics and musicological conjecture. The image we conjure up of him shapes the way we hear his music, especially the brutish non sequiturs of the stormy late stuff.

But it’s often misleading to deduce too much about the man from the facts and fictions we’ve gathered about his life. For the most insightful autobiography of Ludvig van, just turn to his music. Few composers were able to communicate their internal world as directly as Beethoven, with all his blemishes and beauty there to hear. And nowhere is that more true than in his string quartets and piano sonatas.

Tonight, Glasgow Music launches a three-year series covering these two immense and intimate bodies of work. Performing them are the city’s new artists-in-residence: the London-based Elias String Quartet and the Welsh pianist Llyr Williams. How do they feel on the eve of such an epic (and epically drawn-out) journey?

Sara Bitlloch, leader of the Elias Quartet, says â€œit’s as if we’ve been getting to know every facet of himâ€. Williams says that the piano sonatas â€œreflect the complete personality of Beethoven. Everything can be found in there: his sense of humour, his roughness â€“ he was a pretty rough kind of guy as well as a genius, and that’s important to recognise â€“ and also his moments that transport us another world completely.

There’s a degree of sanctimony in the way that Bitlloch and Williams talk about this music. Bitlloch calls the quartets â€œour bibleâ€, just as the conductor Hans von Bullow called the piano sonatas â€œthe New Testament of musicâ€ (he considered Bach’s Well-Tempered Klavier as the Old Testament). To handle the soul of a great composer is a privilege not to be taken lightly.

Unlike the nine symphonies, all written during the middle period of his life, Beethoven wrote sonatas and quartets throughout his career. There are the three early Op 2 piano sonatas, charming and graceful. There’s the wildly exploratory middle works: when the Razumovsky Quartets (Op 59) were slammed at their premiere, Beethoven told his critics that â€œthey are not for you, but for a later ageâ€. Then there are the profound, genre-defying late sonatas and even later quartets, some of the last music Beethoven wrote. He always broke the rules, but the Hammerklavier Sonata (Op 106) and the Grosse Fugue (Op 133) are still mindblowing in their modernism.

The challenge of performing the whole lot, then, is multifarious â€“ â€œa mix of technical difficulty and full-throttle emotional intensity,â€ Bitlloch calls it. Peter Cropper, leader of the Lindsay Quartet and occasional coach to the Elias, has described the way he feels before performing of one of the late quartets as â€œlike setting out to climb a mountainâ€.

But the early quartets are the hardest, according to Bitlloch. â€œThey’re so elegant. They encompass all the difficulty of Haydn, Mozart and Beethoven â€“ it’s a very specific kind of difficulty. The late quartets are perhaps less technically but more emotionally challenging,. It’s a case of feeling strongly enough and finding a way to communicate that together. At the beginning we tended to play a lot without talking much, then discuss how it was for each of us.â€

Beethoven never intended his music to be easy listening, or indeed easy playing. He refused to let his music be heard as entertainment and wilfully challenged his audiences and performers. Still, says Williams, â€œit’s much more gratifying to do a complete set of Beethoven than a complete set of Mozart or Haydn â€“ that’s why so many pianists turn to ‘the 32′. They allow for such extremes of expression. They contain some of Beethoven’s most personal moments: the first movement of the Moonlight Sonata, for example. Op 26 and 27 show his incredible experiments in form. Op 110 shows his improvisational side, which in a way was unique to the piano.â€ The fitful arpeggios in the first movement of Op 110 might be as close as we can come to Beethoven’s mind unmediated â€“ to what he might have played alone at the piano before committing any notes to the page.

â€œBut Op 109 is more difficult than Op 110,â€ Williams continues. â€œOp 110 is a complete journey from beginning to end, whereas in Op 109, Beethoven always seems to be second guessing himself and interrupting himself. But that’s something I’ve just got to accept. The late sonatas are full of sudden outbursts just when you think everything is calm and poised.â€

Countless recordings of the sonatas and quartets have been made over the past 100 years, many of them pinnacles of great performers’ careers. Playing these works is a rite of passage, but they’re also works that musicians will revisit again and again. â€œI can’t imagine ever getting bored of them,â€ says Bitlloch. â€œThese are great lifetime pieces.â€

Does she find it daunting to add her voice to such an august performance legacy? Not so much that it’s crippling, she says. The quartet listened to a lot of recordings in the past, â€œbut stopped once we started learning for ourselves. We have to find our own voices in this music.â€ Williams, too, says that he avoids other recordings, â€œalthough obviously I listened to loads back in the day. Now I have to find my own way of communicating these pieces. I’m still finding new things every time I play them.â€