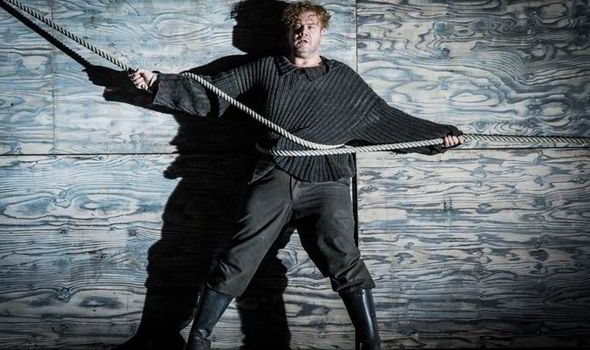 First published by the Guardian on 24 February, 2014

â€œThe movie starts at about twenty past,â€ says the guy at the box office, authoritatively. â€œJust a bunch of adverts until then.â€ We ascend the eight flights of escalators, stock up on pic’n’mix and arrive at Screen 8 of Cineworld Glasgow with a couple of minutes to spare before 3pm. The feed to London’s Coliseum is already up and running. It’s a bit glitchy: definitely live, not adverts. The cameras pan across the well-heeled audience taking their seats, the orchestra tuning up and the chorus chattering in the wings. The house lights in London dim bang on the hour â€“ ours take a few minutes to follow suit â€“ and we’re off, plunged into the seething tensions of 1940s small-town Suffolk. A trickle of advert-averse viewers wander in at twenty past.

English National Opera’s new venture into live-screened opera has attracted industry hype for a few reasons. It was less than two years ago that ENO’s artistic director John Berry claimed not to be interested in such endeavours: they don’t create new audiences, he said, and â€œputting work out into the cinema can distract from making amazing quality workâ€. The company explained their about-face in December by announcing a fresh take on screened opera, promising rock ‘n’ roll camera angles, HD hyper-realism and a degree of intimacy and immersion that existing screenings from, say, Covent Garden, Glyndebourne or the Met don’t tend to offer.

The hype also comes down to the production itself. David Alden’s rendering of Britten’s Peter Grimes is among the finest productions of any opera to come out of London in recent years. Its stark emotional power is overwhelming in the theatre. Whether it can translate to the screen will be a real test of what the opera-in-cinema format can deliver.

ENO has hired Andy Morahan to mastermind the filming. The director has previously shot music videos for Guns N’ Roses and Michael Jackson, and he goes in for multiple camera angles, ultra-bright lights, plenty of movement and extreme close-ups. We see every muscle movement in the singers’ faces. Detailed studies of Elza van den Heever’s tongue and Stuart Skelton’s breathing technique will provide invaluable teaching material for young opera singers for years to come.

The cameras never sit still, always zooming this way or that. A funny thing happens when the frame flits between singers but the sound doesn’t follow: we end up watching, say, Ned Keene’s mouth or a close-up of the Nieces while listening to the voice of Mrs Sedley. Sometimes the cameras switch to the chorus perspective and suddenly we’re looking out into the audience like a performer â€“ to me an unwelcome reality jolt. During the orchestral interludes the frame cuts from stage to pit, revealing bassoonists’ embouchures and violists’ bowing arms in rare anatomical detail. Edward Gardner is subjected to a recurring close-up of the back of his hairline, clean-cut and beaded with sweat.

I can see what Morahan is going for: something vivid and dynamic that immerses you in the action with dimensions that wouldn’t be possible in live theatre. There’s no question that the cast can handle the close camera work, and that their facial expressions deserve the attention â€“ the acting is outstanding down to the last chorus member. It’s a treat, too, to witness the ferocious energy of the ENO orchestra during the interludes. In busy crowd scenes the camera navigates its way insightfully to pick out details we might have missed in the fray. It makes for frenetic watching: sometimes rewarding, but hard to sink into and a bit try-hard.

Early in Act I the live stream cuts out and a groan goes up. â€œAll that posh technology was never going to hold out,â€ sighs the chap behind me. After five minutes of blank screen we’re reconnected to London and nobody seems too bothered. Given the ticket price (Â£17.90) it’s a remarkably accepting audience.

By the second interval, reactions to the filming style seem to be mixed. One woman says the restless cameras are making her feel nauseous. Another says she’s enjoying the close-ups of the orchestra: â€œit’s about time opera orchestras got more creditâ€, she says, and besides, she recognises one of the cellists. A gentleman says he’d rather not see opera singers’ faces in quite so much detail â€“ â€œsinging does not exactly flatter the featuresâ€. Several viewers take issue with the interval feature, a frothy behind-the-scenes documentary that introduces the cast, crew, Gardner, even Gardner’s toddler son. â€œJust because we’re at the cinema, why do they think we need constant filler entertainment forced down our throats?â€ one man complains. â€œIt really shattered the spell.â€

By the end everyone seems agreed on the fundamentals: that the production is monumental, that Skelton is staggeringly good as Grimes and van den Heever heartbreaking as Ellen Orford. Iain Paterson gets a fond cheer for being a Glaswegian as well as a terrific Balstrode. Perhaps Morahan’s cameras would do better to sit still, perhaps the glaring stage lights could be softened a little. But some of the production’s power, at least, has reached this high-rise multiplex. No, it wasn’t as powerful as the real thing. But at 400-odd miles north of the Coliseum, a bike-ride from home and only the cost of a (pricey) cinema ticket poorer, personally I’m grateful to ENO for taking the plunge.