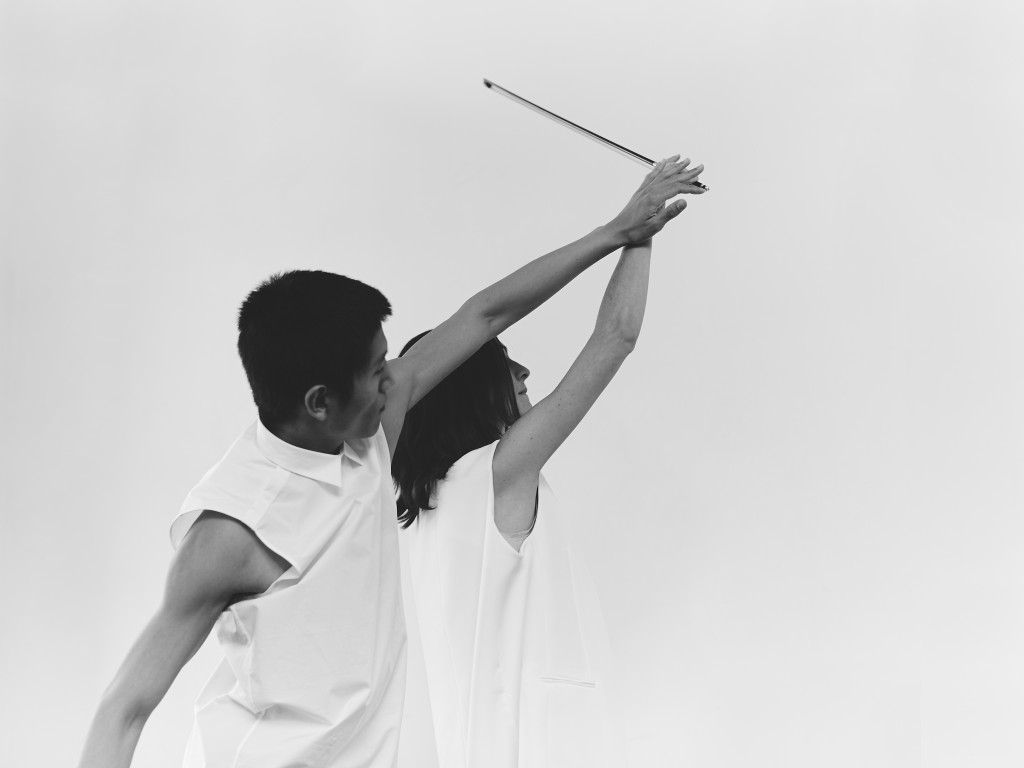 First published in The Herald on 11 November, 2015

JS Bach knew a thing or two about dance. Even his most profoundly devotional church music is full of rhythms and forms built on honest-to-God dance steps. His arias swoop to the contours of minuets and sarabandes; his bass lines swing to beats that are designed to set our feet tapping. “Should we simply listen to the music, or can we move?” is a question posed by the Scottish Ensemble’s latest project, and their own response is unequivocal.

Goldberg Variations is a collaboration with the Swedish contemporary dance company Andersson Dance — and it’s a collaboration in the truest sense of the word, because the Ensemble musicians not only play for the dancers, but also dance with them. The piece premiered in Stockholm in September and comes to Tramway this weekend before touring Scotland and the north of England.

It’s an original, playful and subtly quite brave performance. Bach’s monumental keyboard score is played complete in Dmitry Sitkovetsky’s arrangement for string ensemble. The stage is bare apart from slim music stands and chairs for the cellists and double bassist. The players don’t accompany the dancers from the sidelines: they are included in the choreography as bodies and personalities in their own right.

During the Aria — a simple two-voice theme that lays the ground for the following 30 variations — the five dancers wander about in sneakers and street clothes. The musicians are dressed in similarly muted natural fibres, like an arty United Colours of Benetton ad. In the first variation, a dancer begins to wiggle and groove with the kind of daft moves you might find yourself making mindlessly if you were listening to the Goldbergs at home in your kitchen and reacting without fear of being seen.

As the variations unfold, the dancers react in playful, intimate and expressive turns. “This is Variation Number 4” declares one of the troupe. “It’s a unison composition” — then she launches into an emphatic synchronised formation with the others. “The sixth variation is a canon. I cannot dance to it,” she later tells the audience, then plonks herself down on a cushion and simply watches the musicians. At first it’s just the the dancers who move, but one by one the string players join in. They jump and shimmy while playing. They set down their instruments, thump the floor, reach to the sky and roam the stage. I won’t give a blow-by-blow account because the surprises and sense of spontaneity are part of the point.

This project isn’t a one-off for the Scottish Ensemble. Broadly speaking, the group is moving away from straight concert formats and pursuing cross-arts collaborations. A year ago they staged a programme called 20th Century Perspectives in a disused brutalist shopping centre in Glasgow. They cleaned out the muck, set up a bar, faded the strip lights and wore jeans and trainers. Artist Toby Paterson created site-specific Perspex pieces to frame the music. The crowd that attended was notably young and stylish.

Earlier this autumn I saw the Ensemble perform three Brahms Choral Preludes in Bucharest with the violinist Patricia Kopatchinskaja, who appeared from the back of the stage, barefoot and improvising around the Ensemble’s tuning notes, then had the musicians singing the chorales as well as playing them.

What’s so radical about getting a bunch of string players singing and dancing and wearing jeans? “Sure, we’re used to being watched on stage,” says Jonathan Morton, violinist and Scottish Ensemble artistic director. “But we’re used to being judged for skills that we’re highly trained in. Singing and dancing? That’s a whole different thing. It’s about embracing our vulnerability, our human fragility, which is not a place people tend to go in classical music. We’re taught a default mode of bravura. I’m interested in exploring the other side, and it’s interesting that audiences tend to react to that, too. I think it feels more alive.” 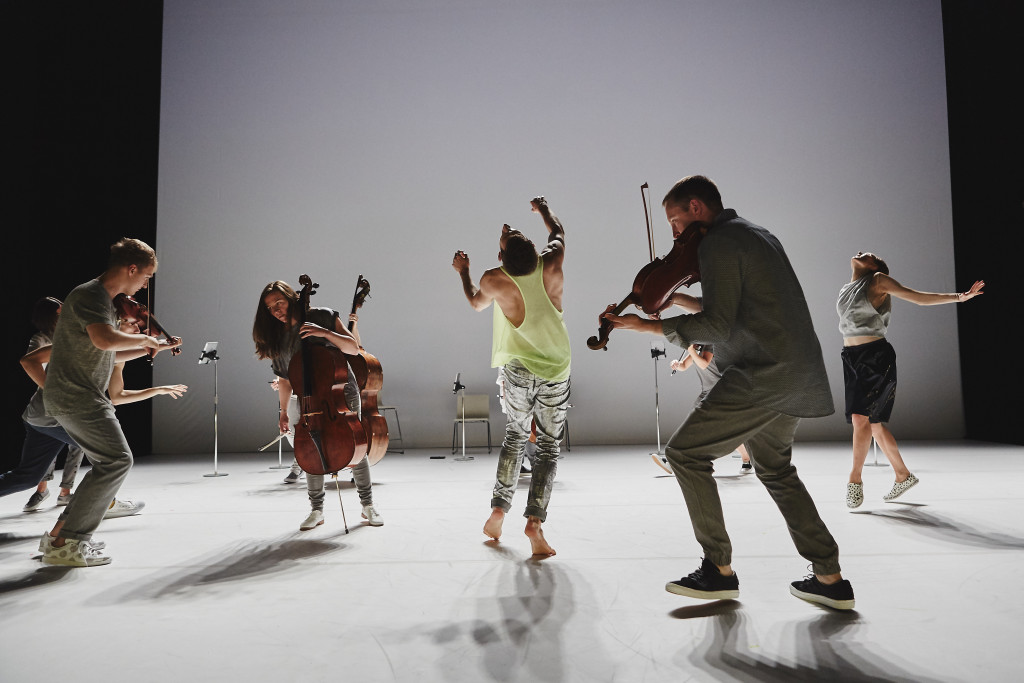 Morton acknowledges that he’s had to wade through more prosaic considerations, particularly around how to pay for these collaborations. “The classical music world is so risk-averse,” he says. “It’s hardest with a big group like an orchestra because the risks are magnified. And because of funding structures, there are always fears over who the particular audience will be for any particular project, but that puts audience in boxes in a way we want to escape from. A huge benefit of the Scottish Ensemble is how nimble we can be, and it’s heartening to work with a management team that is also willing to back the risks. It’s interesting that out of all our recent projects, it’s almost always the unconventional, risky ones that earn us the most attention.”

Talking to Orjan Andersson, artistic director of Andersson Dance and choreographer of Goldberg Variations, it seems that Morton’s gung-ho spirit is shared by his Ensemble members. I ask about the challenge of working with non-dancers and he just shrugs. “I’m interested in different kinds of bodies. I work with actors, singers, now string players. I knew the Scottish Ensemble wanted to break down barriers about how to move on stage. I first saw them play a regular concert in London, and although in my world it didn’t look like they were moving that much, I could see their charisma and their expressions.”

“We’ve always been quite a physical group,” agrees Morton, “and we were expecting to be pushed into uncomfortable places. Orjan never asked us to do things for the hell of it. We’re not playing and doing pirouettes… that would be way too literal for him. The energy he whipped up was incredible and we were totally buzzing during rehearsals, like kids.”

Why the Goldbergs? For Morton, the choice of music had a lot to do with structure: he knew Andersson would have fun exploring the gaps between the variations. “Also the extremes between frivolous and mundane, between very poignant and very intense. I knew Orjan would run with that.”

Andersson himself admits to being sceptical when Morton suggested the piece. “This is music that everyone has heard a million times,” he says. “How were we going to deal with that? So maybe that’s why we’re starting the show in a very didactic manner, and only later do we move away from that quite static way of telling the story. This piece was originally exercises for the instrument. It was Bach having fun and being inventive. We want to focus on the playfulness. The first dozen variations are light and dancy — and by dancy, I mean that they make you want to move — then they turn darker. I tried to take each variation and find the key to the soul of it. The first variation is pure, crazy joy, and hopefully we express that.”