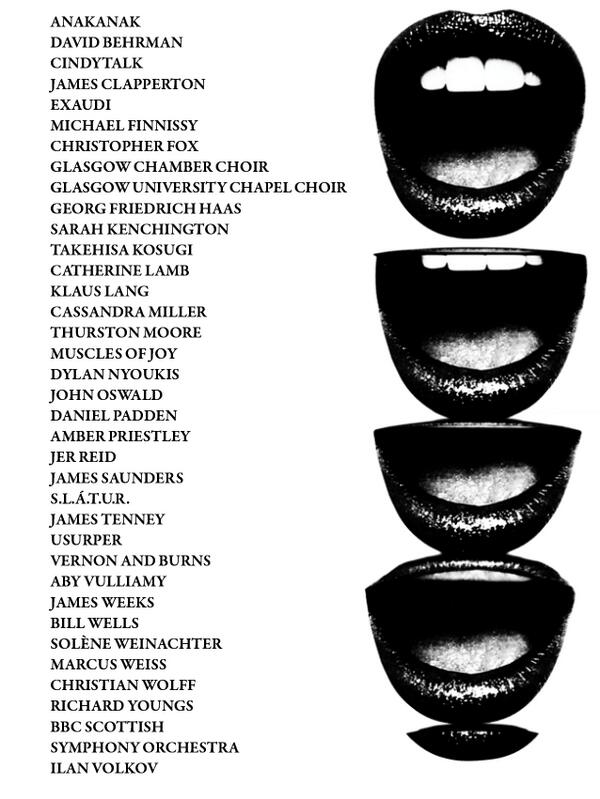 The inaugural BBC Scottish Symphony Orchestra Tectonics festival was among the stand-out events of last year’s musical calendar, remarkable for its wide-open experimentalism and for its success at getting new audiences through the doors of City Halls and into orchestral concerts. This year the festival is back with a programme, announced yesterday, built on the same principles and featuring a whole new rostrum of experimental, eclectic, non-systematic and downright unpigeonholable artists.

Ilan Volkov remains at the heart of the project: the BBC SSO’s inexhaustibly gung-ho principal guest conductor founded Tectonics in Reykjavik three years ago and has since staged versions of the festival in Adelaide and Israel as well as in Glasgow. Once again he teams up with Scottish music events producer Alasdair Campbell, who weaves a crucial strand of non-orchestral, non-formal, non-‘classical’ artists through the programme.

The format is largely similar to last year’s event. Festival-goers purchase a day ticket or a full weekend pass, the idea being that they’ll stick around to hear not just the artists they already know but also names that aren’t so familiar. Reflecting on last year’s experience, Campbell says that â€œsome of the audience didn’t know how to go to a classical concert; they turned up late, like they might for a rock gig. Others didn’t know how to put on the kind of wristband you get at any rock festival.â€ The cross-over of those two audiences is, of course, precisely the point.

Top of the bill is American composer Christian Wolff who, like Lucier, is something of an elder statesman in experimental music. The soft-spoken, playful, politically engaged pioneer turns 80 this year and provides a direct link with 1960s avant-garde circles around John Cage and Morton Feldman. â€œHe has been at the forefront of American contemporary music for more than 50 years,â€ says Volkov. â€œHis work has been described as ‘the folk music of outer space’, which I think is a pretty good place to start. He uses unusual methods of communication between musicians. He explores the social situation of singers and players. His political works pose many questions â€“ he’s a real searcher. For Christian, the process is as important as the work. He’s similar to Lucier in that sense, but far less of a purist. His pieces really rely on their performers. And at the end of it all, he loves old concepts like melody, harmony and rhythm.â€

Tectonics presents some of Wolff’s important early experiments in indeterminacy such as For One, Two or Three People (1964), his 1950s madrigals, and more recent orchestral works such as Ordinary Matter (2000). The composer himself will also perform solo piano music from the Keyboard Miscellany collection he began writing in 1988.

Campbell has programmed a motley Friday-night opener â€“ a kind of taster pack of the whole programme â€“ that extends the festival from two days to three and ventures outside of City Halls to St Andrews in the Square. It’s here that Bill Wells will unveil a new arrangement of his Summer Dreams project with members of the BBC SSO; Austrian composer Klaus Lang performs an extract from Ugly House for solo harmonium; saxophonist Marcus Weiss plays the roaming Saxony by American vanguard James Tenney; and Berlin-based musician Cat Lamb brings her contemplative minimalism to a duet (with Lang) for viola and harmonium. Closing the night is an improvised set from Sonic Youth frontman Thurston Moore and Japanese Fluxus composer/violinist Takehisa Kosugi, a collaboration that first surfaced on the 1999 Sonic Youth album SYR4: Goodbye 20th century.

Vocal music has increased prominence this year thanks to the presence of top-notch vocal ensemble EXAUDI: they perform contemporary choral works by Christopher Fox and James Saunders(among others) and a new arrangement of Favourite Poets by the intricate, politically-charged pen of Michael Finnissy.

EXAUDI’s conductor James Weekshas written a new promenade piece for amateur singers (rather good ones â€“ the Glasgow Chamber Choirand Glasgow University Chapel Choir) called Radical Road. Inspired by the path that runs around Edinburghâ€™s Salisbury Crags and setting texts by Thomas Paine, the score explores themes of revolution, social justice and equality. Add these to his elements of spacial play and amateur music-making and the spirit of Wolff looms large.

Last year’s big orchestral commissions kept their emphasis on UK composers; this year the BBC SSO features two leading European composers, Georg Friedrich Haas and Klaus Lang, both of whom deserve to be better known in the UK, and new work from American compesoser David Behrman, founding member of the Sonic Arts Union.

Closing the festival is a first-time orchestral work by Glasgow-based multi-instrumentalist Richard Youngs. Youngs describes Past Fragments of Distant Confrontation as a fusion of 1980s D-beat (a punk sub-genre that kick-started Youngs’s musical mind as a child), D.I.Y. experimentation and a naive approach to classical form. For Campbell, this what the festival is all about. â€œRichard is a wonderfully singular and intuitive musician. He has learned to write for orchestra thanks to this commission. It might sound terrible; it probably won’t. That’s all part of the excitement.”

“I don’t believe that everything we do in a new music festival is going to be brilliant,â€ Campbell says, pointing to an Icelandic model of open experimentation and participation. â€œNew things need to be allowed to fail. The point is the discovery along the way.â€