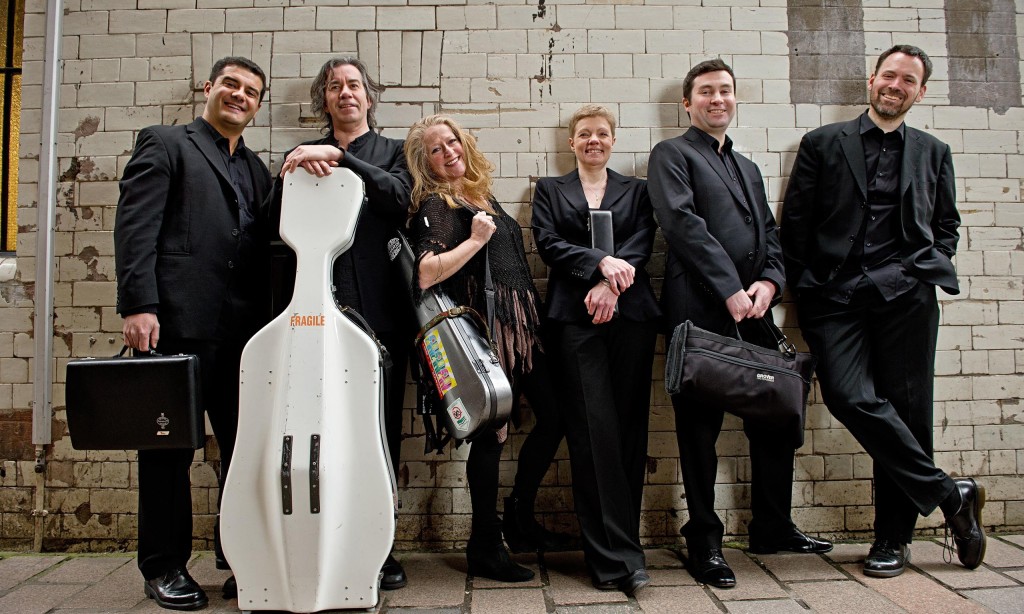 First published in the Sunday Herald on 19 October, 2014

“You can’t print that in the Sunday Herald.” John Harris, composer and artistic co-director of Red Note Ensemble, is looking sheepish. I ask why not. “People will laugh,” he says. “And it’s rude.”

The phrase in question is nothing less than Red Note’s motto: “play brilliantly and don’t be a knob”. Initially it was a semi-serious joke between the musicians; increasingly it sums up the gist of the group’s success. Robert Irvine, Red Note’s cellist and other artistic co-director, describes an Austrian conference delegate who recently asked whether the ensemble is “a values driven organisation”; Irvine accidentally mentioned the motto and found himself earnestly explaining how to spell it.

The point is, the sentiment seems to have worked. Red Note is a relatively young ensemble yet, having only been in operation for six years. Yet it has already carved out a unique and respected role within the cultural landscape of Scotland, the UK, perhaps even Europe. As of this year it is associate ensemble of Aberdeenshire’s Sound festival, and on Friday its opening concert is a collaboration with the Orchestre d’Auvergne premiering specially-commissioned works by William Sweeney, Brian Irvine and Laurent Cuniot. The motto might be daft but the intent is absolutely serious; Red Note clinches the balance between playfulness and erudition.

Its directors are an unlikely pair. Irvine is laconic, deadpan, beatnik; Harris fast-talking, chipper and, according to Irvine, “a genius at fancypants industry chat”. They recall the first interview they did for The Herald three years ago. “Then we were in the first flush of married bliss,” says Harris. “Now we bicker all the time.” (Irvine: “we do not. We never bicker.” Do they have artistic differences? They reply “yes” and “no” simultaneously.)

We meet for lunch the day before the ensemble heads to France to perform an interactive multimedia opera with Ghent’s LOD Music Theatre, so I interrupt the quibbling to ask this: why did LOD turn to Red Note as collaborators rather than any number of other European contemporary music ensembles that could have done the job?

The answer has several factors. Bottom line is that Red Note is very good. Its core musicians are technically terrific and musically fearless – that’s the ‘play brilliantly’ part of the motto. Last year Red Note was resident ensemble at the Huddersfield Contemporary Music Festival, the UK’s annual gathering of bespectacled, black-turtlenecked avant-gardists. It was a terrific showcase that solidified what we in Scotland have known for some time but what hadn’t yet been fully recognised south of the border and beyond. After a formidable performance of notoriously challenging music by James Dillon, critics and industry people from around Europe could be heard uttering the name Red Note in rapturous terms.

But there are many top-notch contemporary music ensembles: LOD could have chosen umpteen that are based much closer to Ghent than Edinburgh. What sets Red Note apart is the range and versatility of its artistic scope and the gung-ho spirit with which it tackles any project going. The ensemble’s autumn schedule ranges from the aforementioned multi-media opera to intensive composition workshops to pub nights to recording sessions of music by Eddie McGuire, John Macleod and Gabriel Jackson.

Major ventures over the past few years have been bold and disparate. Philip Glass’s 1000 Airplanes on the Roof performed under the body of a Concorde; music theatre projected onto the craggy facade of Tantallon Castle; a sort-of opera with music by David Fennessy and words by David Shrigley. “Maybe LOD were intrigued by us because we don’t obey the rules of normal contemporary music groups,” says Harris. “We’re not restrictive about what we play or where we play it. When your first gig is basically in a pub…”

By ‘pub’ Harris is refering to the Noisy Nights series, Red Note’s enduring commitment to staging contemporary music in bars. Anybody can submit a score and have their efforts performed to whomever happens to be within earshot. It might sound like a bit of fun – and usually it is – but there’s more to it.

“There is a serious point is about our obligation to Scottish composers, Scottish audiences and Scottish young people,” Irvine says. “We are hyper-aware of the responsibility that comes with being publically funded. An arts ensemble isn’t some kind of game with free toys, which is what some companies seem to think it is. How to present to audiences without preaching to them; how to reach people; how to provide something useful… These are the fundamental questions for us. I’m a big old socialist and it matters.”

(Harris steals a few salad leaves from Irvine’s plate and cuts in: “are you saying I’m not a socialist?” Irvine: “You never talk about it.” Harris: “I can be a quiet socialist, sitting in the pews. Anyway, the musicians who play with us are an eclectic bunch. Part of what we’re about is accommodating that eclecticism. They could be anything they want – even UKIP members.” Irvine looks sceptical but grudgingly agrees.)

The major work at the heart of last year’s Sound festival was Framed Against the Sky, a five-week project masterminded by Brian Irvine that posted Red Note musicians around the nooks and crannies of Aberdeenshire for performances in pubs, schools, galleries, food festivals, street corners, on the quay-side. “It was a bit like Louis Andriessen’s De Volharding,” says Harris, referring to the Dutch composer’s legendary ‘inclusive concerts’ staged around Amsterdam in the 1970s, “but in a quieter, more Aberdeenshire sort of way.” Irvine describes the experience of “trying to play contemporary music in the rain, often being completely ignored. Sometimes it was totally depressing, but by the end of the day we always had the most inspiring encounters. People would pull penny whistles out of their handbags and join in, or poets would suddenly start reading their poems while we improvised.”

For many classically-minded musicians, a project like Framed Against the Sky comes under the category of ‘outreach’, while their primary concern is performing in formal concerts in formal concert halls for hushed, knowing audiences. “I often ask my cello students what their artistic dreams are,” Irvine says. “The replies usually involve a recital at the Wigmore Hall or a concerto with some prestigious orchestra. Sometimes I wonder whether musicians are basically just pursuing an egotistical project. Surely we have to contribute a societal function. We have a role to play. I like to think that Red Note has found itself a good role.”

Irvine and Harris both acknowledge that the industry recognition gained through exposure such as the Huddersfield residency is important. It opens doors to new collaborations and platforms – next year they’re off to the prestigious Dutch festival November Music, for example – and “wakes up” programmers at the Proms, BBC Radio 3 and so on.

“I suppose we’re becoming accepted as safe pairs of hands,” Harris says. “It probably took a little longer because we’ve gone about it in the reverse order from most groups, starting in pubs and primary schools rather than posh concert halls.” For Red Note it is crucial that there’s no hierarchy. “We don’t have an A-team that plays Huddersfield and a B-team that plays the nursery in Aberdeen. It’s all the same; all about being alive and responding to the people around you. Contemporary music has been locked away for too long. Let’s get it out there.”